Aimee goes through the “experience” of milking Clara.

She gains an Essence of Confidence and sure looks like she could use it!

Damien then supervises while Aimee repairs the broken fridge before they head outside to look at the clouds.

A/N: This is not the final shape for the house … an idea came to me and will be done later on as other purchases take priority!

Aimee tends to the garden, maxing the skill while doing so.

Hooray! This means that parks and beaches are now unlocked!!
OSprings and Gardens made by BreeMiles will be placed on the Desert Bloom lot

Damien makes a salad for himself and in her excitement over a park, Aimee has trouble holding the bowl while she makes salad for the family.

After they eat, Aimee feeds Dax.

Octavia swings by and discusses food with her son.
Aimee isn’t sure she likes them discussing food while she’s trying to feed Clara. 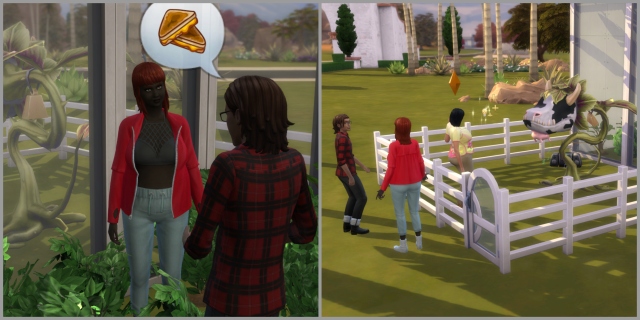 She heads inside to fix the computer before continuing her freelance assignment but several phone calls derails Aimee’s concentration.

Uncle Mike has passed away.
His son/her cousin, Nash, has been adopted by Father Winter.

A/N: I was very focused on these messages and somehow missed seeing the notification for Ericka Silversweater becoming a toddler

Damien comforts his wife then offers to do the nightly feeding.

More changes to their house. 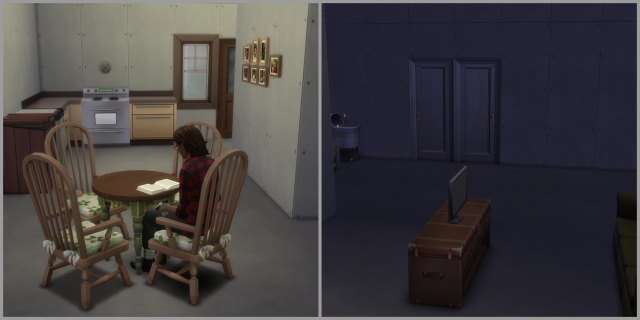 After Aimee wakes, they move the bed and bassinet to the newly designated bedroom.

Dax and his mom have grown close. 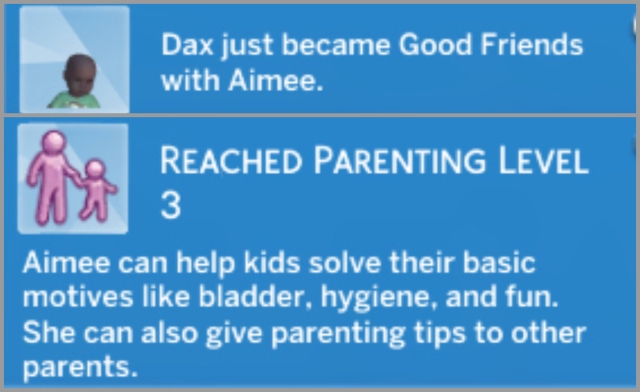 Their first snow! It didn’t last long and neither Aimee or Damien reacted to it.

Aimee invites Nash over for a visit to see how he’s doing.
Ainsley drops by and he tells both cousins about his move.

A/N: You can’t ask children to move in and I debated on using a cheat but decided to leave him where he is for now. He seems happy and can always come by for a visit. Drifter House 01 & Drifter House 02 now stand empty … how sad!

“And today’s entertainment is Aimee milking Clara!”
Aimee wishes she didn’t have an audience but it is what it is.

Thanks to Uncle Mike, she collected an Essence of Sadness.

Ainsley and Nash hug while Aimee is inside getting cleaned up. Cute! 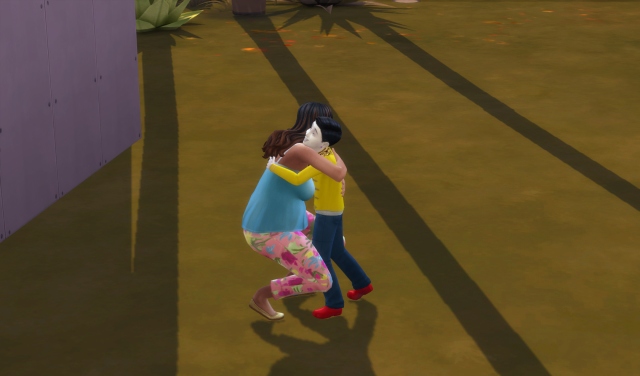 A notification pops up that is too important to ignore.
Aimee checks to make sure everyone is okay before heading on her way.

Marcus’ spirit is fading away so Aimee strengthens his connection to the physical world.

This is a good stopping point.