Warning: This is a long chapter! A LOT happened today.

The girls seems to be doing better this morning.
Marc, not so much.

Ainsley teases Aimee about her face but that doesn’t seem to faze her.

The girls head off to school with smiles on their faces.
Ainsley’s seems bigger because of the special attention she receives.

Marc still feels the loss of his wife and hopes the other kids will be nice to his girls.

Ainsley started a food fight in the cafeteria.

Marc tells the person on the other end of the line that this is unacceptable behavior and the children need to be punished.
(A/N: Mr Addy was sitting next to me when this happened so I let him choose which option Marc would take.)

The teacher caught Aimee looking at another student’s test during class. 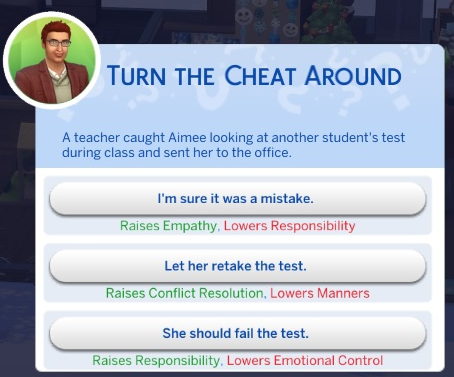 Marc tells the person that Aimee will take responsibility for her actions and should fail the test.
(A/N: This time I asked my daughter. LOL)

At 9:47, Aimee has a decision to make.
The principal is visiting their classroom and the kid sitting behind her pelts her with … something. Should she ignore it or ask the kid to stop? 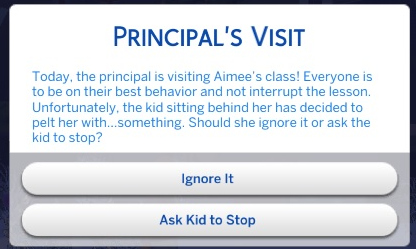 Aimee decides to ask the kid to stop.

At 10:00, Ainsley has a decision to make.
A girl in Ainsley’s class keeps sitting close. Is she trying to be friendly or just copy off Ainsley? 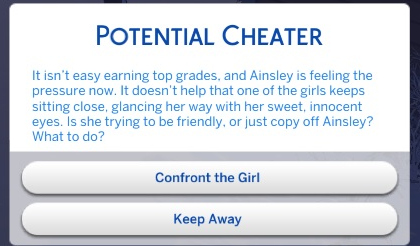 Ainsley picks a seat in the back of the classroom where the girl won’t go.

It’s only 10 am and Marc already feels the weight of the day as he heads off to work.

The girls arrive home from school at 3 pm and both are smiling.
Ainsley’s is a bit brighter because she is in range to earn the responsible trait.

They immediately head upstairs to play with toys in the other twin’s bedroom.

They continue doing activities in the other’s bedroom but also take time to chat with each other.

Marc arrives home at 6 pm and feels tense from the day he’s had.

(A/N: He doesn’t have a moodlet or visible signs other than wiping his brow to indicate an illness so I will wait to see if anything develops before purchasing medicine.)

Part of his tension could be due to the fact that he was in line for a promotion but didn’t receive it.

He makes sure the girls are doing their homework before starting to make brinner (breakfast for dinner). Tonight’s menu: French Toast, yum! 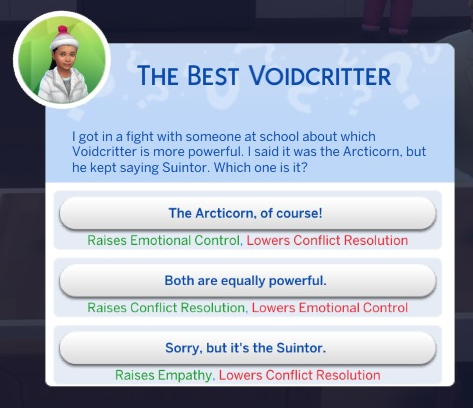 Marc lets her know that both are equally powerful.

Oh, dear. Aimee is going through a phase. 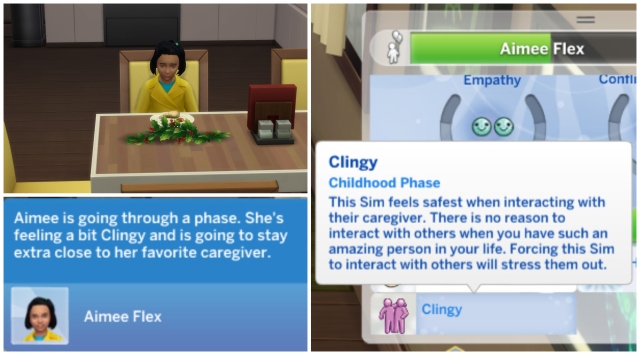 As soon as Marc notices, he asks her about it so he can understand what it means and how best to be supportive while she goes through it.

While Marc and Aimee are talking, Ainsley wakes up.

She has also entered a phase. 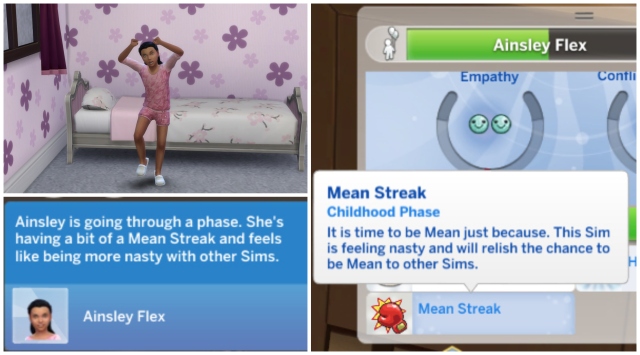 Aimee heads to bed and Marc tries to learn more about what Ainsley is dealing with.

It won’t be easy but he is determined to help her too.

It’s getting late so off to bed they go.

However, not all are sleeping through the night.
An angry Ghost Aicha pummels that poor bear until it makes her feel better.

Then she haunts Aimee’s dresser which startles her.

Ghost Aicha calms her concerns with some chat and a big hug.

Being a ghost doesn’t stop Aicha from talking about one of her favorite things! LOL