While growing up, Marc enjoyed listening to his mom tell of her adventures building their home from the ground up. Marc decides to give it a go also. 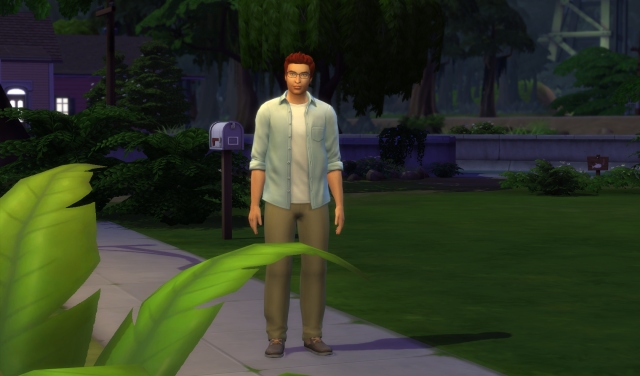 He had no idea what to expect when he bought the plot of land sight unseen but the green grass was a pleasant surprise. “It’s so … green! Green everywhere the eye can see.”

“It’s just this side of midnight, I’m awake and have no money. What am I going to do?” Just then, Marc notices a nice fishing spot near the back of his property. He also notices the colorful character nearby but decides the opportunity to earn a few simoleons while figuring out what basics he’ll need takes priority over meeting someone at this moment. 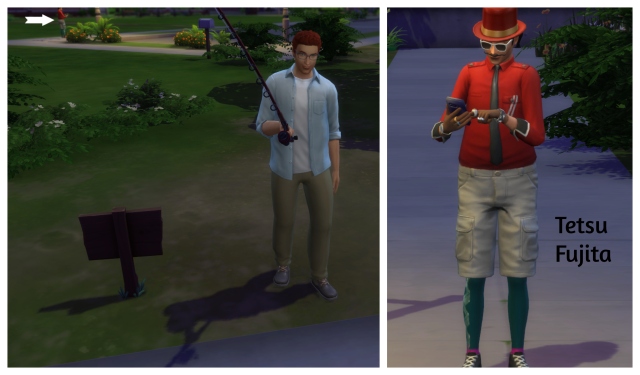 Marc catches several fish before noticing an interesting rock formation and log nearby. His curiosity gets the better of him and he heads over to check them out.

“The sun sure does rise early!” Marc isn’t used to being up at this time & isn’t sure he wants to make this a habit.

Marc sees an interesting tree and doesn’t notice Tetsu walking past in outfit change no. 2

Harvesting and selling the bluebells gives Marc an idea. He applies for a job and is surprised when not only do they hire him on the spot, they also … advance him to a non-entry level position.

Marc is then given his first work assignment.

Selling his collectibles & earning two promotion bonuses (how lucky is that?!), Marc has more than enough to purchase a seed pack of starter herbs. A $35 expense garners him completion as well as getting paid for a day’s worth of work. Not bad for buying and planting a few seeds on a day off!

He earned enough to buy a tent, cooler, bush and outdoor shower. The planter box was a promotion item. 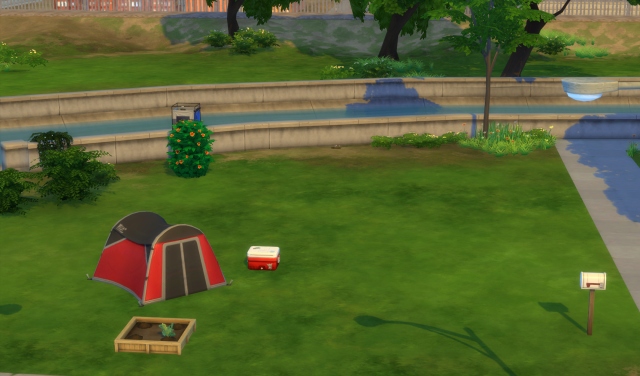 Getting this message was icing on the cake.

His campsite looks purposeful instead of being all Marc can afford so he decides it’s a good time to call Mike. Mike shows up a few minutes later and Marc enjoys showing him around.

Fishing makes Marc hungry so he grabs a bowl of granola while watching Mike playing in the tent with a flashlight. He’s a little upset when Mike comes out a few minutes later with complaints about the lack of things to do, but quickly diverts his attention by teaching Mike the secret handshake he learned in school.

All good things must come to an end. Marc hugs his little brother and lets him he know that he is free to visit whenever he’d like.

Most of the females walking around the neighborhood are either teens or elders. Marc decides the unusual tree can wait when he sees several that might be a bit more promising but unfortunately, doesn’t click with any of them.

Finding an eligible service sim is going to be a challenge in itself, lol

Marc ignores scratching for as long as possible and hopes that whatever is bothering him isn’t contagious. He heads back to the cooler to grab a juice and ends up meeting a few hungry strays. “Sorry, kitties. I don’t have anything to give you today.”

Marc isn’t feeling good and hopes that eating something might help. If not, he plans to go lie down for a while. Fortunately, time (and maybe the vitamins in the juice) helps return Marc to his normal non-scratchy self. Marc grabs a quick selfie to serve as a reminder of what he overcame.

Now it’s time to check out that tree! Marc discovers an opening he hadn’t seen before. He wonders how he missed it.

Whether it’s gut instinct or sheer luck, Marc will take it because his choices lead him to … 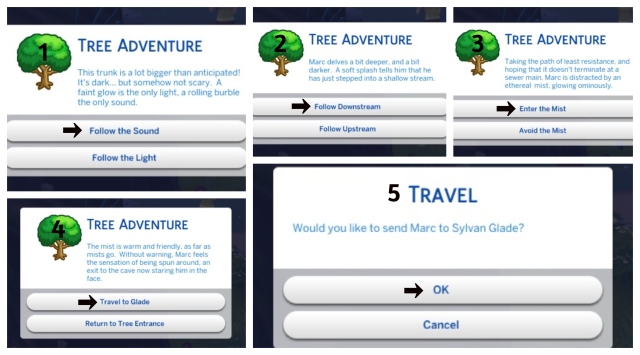 A place of sheer beauty! Upon entering this paradise, Marc sees a small sign welcoming visitors to Sylvan Glade. “That’s a perfect name!”, he thinks. 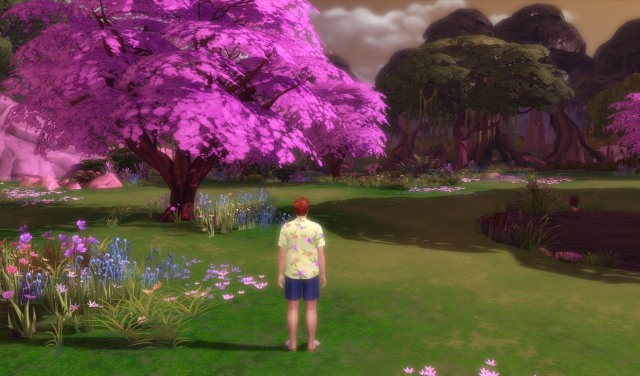 There is a pond for fishing or catching frogs, plenty of plants that will hopefully yield a nice harvest some day and a few mounds for digging. Marc also sees a gorgeous spot for fishing. 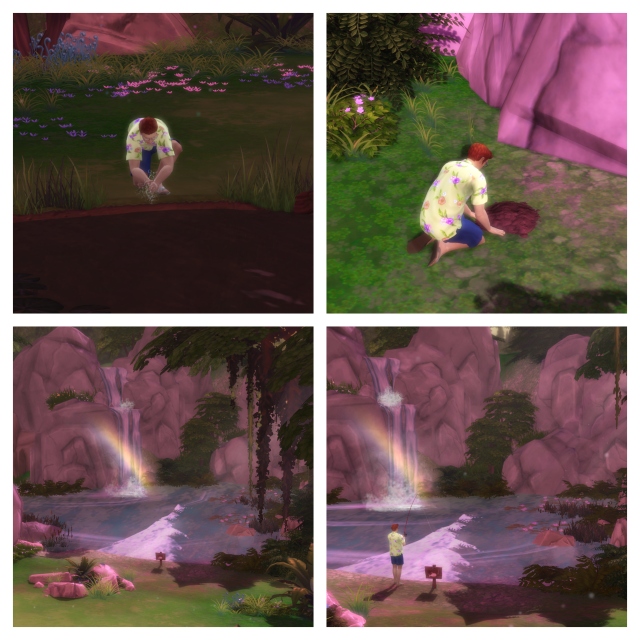 His first catch is a TREEFISH, something Marc has never seen before but heard stories of. He also reeled in a couple of crates. One contained an apple and the other a cute gnome.

By this time, Marc is starting to get hungry again and is in need of his “special” bush. Time to head back home. Which way was it again? 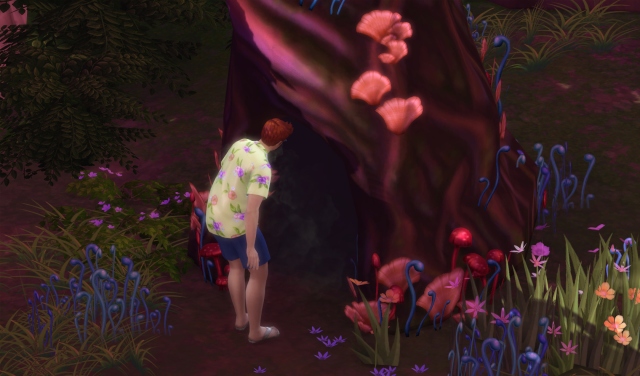 Marc heads to bed after his basic needs are met. He feels pretty confident in his ability to do as well as his mom did and falls asleep while thinking over his day.

First day tally. Marc did very well, thanks mainly to his new job. I need to remember to buy a pet dish so he can feed those hungry strays!

Here are the lot traits the random roller gave. Great soil and cat spot. I’m half tempted to not bother with re-rolling traits for each season.