After placing a phone call or two, Daisy still managed to find time to eat and ponder a few chess moves before work. The garden will have to wait.

A computer happens to be free when Daisy arrives at work so she quickly snags it and finds her next assignment.

Time to head to the scene of the crime.

Daisy takes witness statements from Joaquin Le Chen (doesn’t provide much info but maybe it will fit into the case … somewhere); Diego Lobo and Candy Behr (both give an account of what they saw).

She then starts taking photos of the crime scene and collecting evidence. Daisy discovers a few extra clues in the kitchen.

Both Pari and Daisy find more strangely burnt items in the multi-purpose room but Daisy is the one to notice the wallet on the ground.

Daisy returns to the station and is surprised to see Don sitting in the Chief’s seat. He’s perhaps surprised too because when he hears Daisy come in, he quickly heads over to Caleb and starts chatting.

Daisy knows that Caleb is an Ambitious vampire but seriously lazy at the crime scenes. He sits around and chats with the victims, never taking notes, and rarely collecting any evidence.

Don on the other hand does a bit at each crime scene. While he’s a Romantic, he’s also Noncommittal. He looks mighty handsome in uniform and is sure to be a charming dinner companion.

The end of shift rolls around. Daisy garners that promotion she wasn’t able to nab yesterday. Look at ALL of the items she receives!!

YES!! Tak’Nai Contractors had been busy while she was at work. Daisy can’t wait to see the inside!

Right now it is a merely bedroom and bathroom, but other rooms will be added on in the future. The outdoor shower looks odd inside but Daisy really wanted to get electricity and plumbing in place so she could have a FRIDGE and a bathroom. 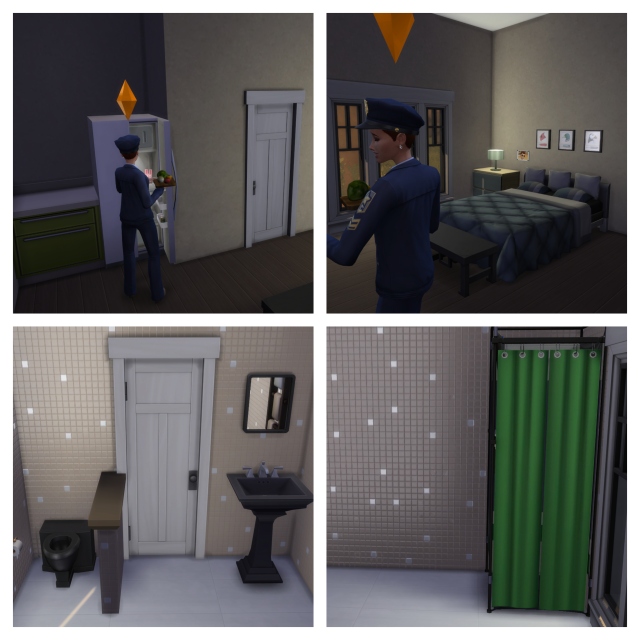 Daisy is glad she doesn’t have company to see her poor quality salad (how is this even possible?!) and decides perhaps a cookbook and a place to keep it would be a good idea. She adds it to her list. 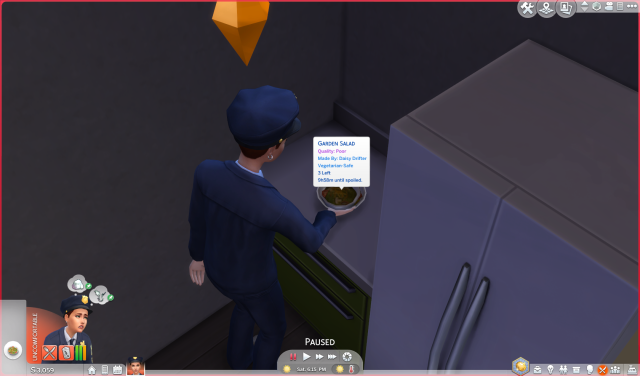 Daisy eats and then takes a quick nap. Ah, this bed feels wonderful! Her attempt at finding some fun isn’t as successful. Noodle got sprayed by a skunk. Ugh! *cough*cough* P-U 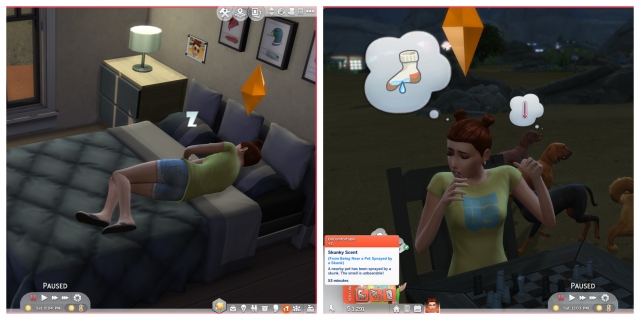 Daisy is too tired to go collecting or push the dogs outside but at least she now has the beginnings of her very own Home Sweet Home!!

Her balance is looking really good & Daisy could add a few more things but holds off in case her first set of bills is larger than she budgeted for.