Marc wakes in a good mood & enjoys eating breakfast with his mom before he heads off to school and she leaves for work.

A few changes happened at the station while Daisy was off during the holiday. They have a new chief, the elder prisoners are no longer locked behind bars (Daisy is going to assume they were released & sent home, the alternative is too sad to think about!) and Seiji seems to have taken to wearing whatever he wants instead of his blue department-issued lab coat.

Daisy is glad the changes aren’t department as she goes to introduce herself to the Chief. He seems like a pleasant fellow and voices what is either advice or a warning. “You’d be wise to watch your back Drifter. Rise through the ranks this fast and you are bound to make enemies.” Good to know.

Hours are spent researching the database and analyzing evidence before Daisy gathers enough information to issue an APB on the suspect.

She heads out to check the suspect’s last known location. 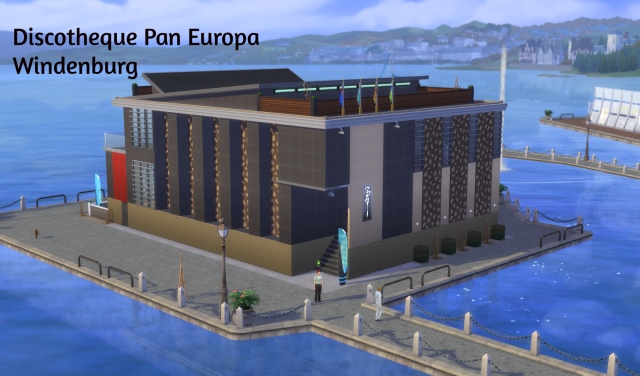 The only person in sight and matching the description is Arnav Joyson. Daisy quickly checks around to be sure before approaching him with caution. His mentioning that he moved here to expand his business sets off a few warning bells and Daisy brings him in for questioning.

He looks like he could handle himself in a fight so Daisy is glad that he isn’t giving her any guff when she pulls him out of his cell to do a search. Both seem surprised to find a fish in his pocket. Daisy sends it to the lab for them to check in case anything was hidden inside it.

He seems to think that he’s got this interview well under control but Daisy lets him know in her own way that it’s she who has things under control.

Arnav seems quite interested in handcuffs so Daisy shows him her pair … along with a favorite story about locking a suspect to a … shame he doesn’t seem to want to hear any more.

Time to get down to business! It doesn’t take long before the overwhelming evidence has Mr Cool and Collected lose his composure and gives a full confession. 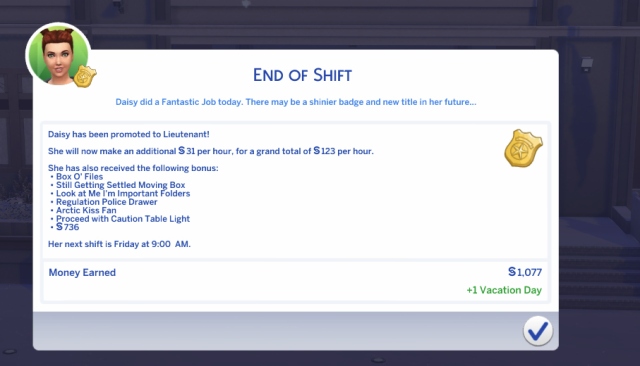 Congratulations on your promotion, Lieutenant Drifter!

Daisy is happy to be home! She shares the good news with Marc and he’s quick to give his mom a hug.

Then it’s Marc’s turn to talk about his day. When there’s a lull in the conversation, Daisy asks about his homework. As soon as she finds out that he hasn’t started it, Daisy encourages him to hop to it and heads outside to check the status of her garden.

After he finishes his homework, Marc plays with clay and makes something he thinks his dad will like. He wants to show him but doesn’t want to interrupt him while he’s busy. 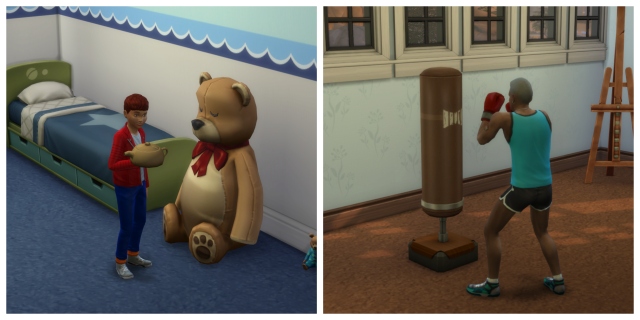 After dinner, they head outside to open the presents Father Winter left behind. Daisy gets a ceramic cookie jar, Marcus receives a digital camera and Marc adds another bear to his collection. They all agree that these are fantastic gifts!

Daisy and Marcus take care of a few chores while Marc watches television. When Daisy finishes what she’s working on, she joins Marc and continues his lesson on saying please and thank you.

Marc needs a little encouragement to go to bed, but eventually all are tucked in their beds and sound asleep. Good Night!

Daisy finds a spot to hang her professional seal and hopes there will be others so this isn’t a mostly bare wall.