Marc is discovering that an early bedtime means an early morning.

His parents are still asleep so that means he can do whatever he wants … as long as he is quiet. He has fun playing in the rain and then restarts the dryer. He’s feeling mighty pleased with himself.

In between rewarding himself with creative efforts in both art & dance, Marc cleans the dishes and puts the laundry away. That is sure to win him some points with the big guy, he thinks.

After playing with Chompy, he decides that cleaning up his art and putting his toys away are also good ideas. He has lots of good ideas and shares them with Bear.

Marcus’ choice in movie makes him feel like he’s still dreaming and possibly having a nightmare. 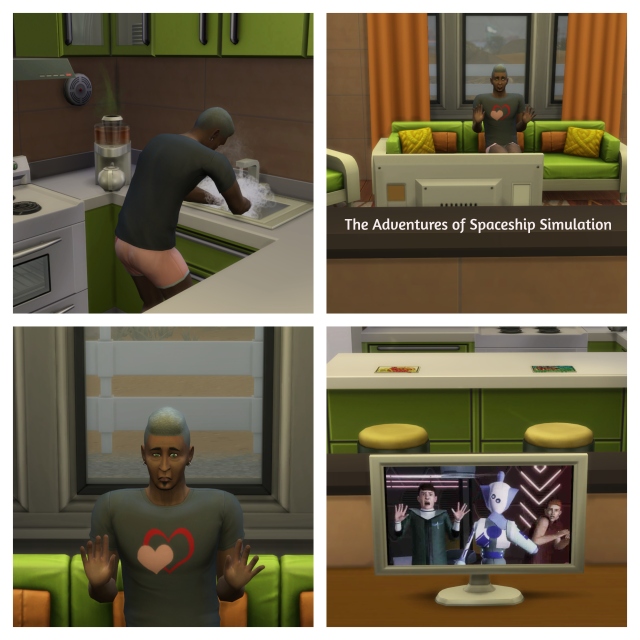 Daisy is not enjoying tending to her garden in the rain. “It’s Winterfest for Sim’s sake! It should be cold so we could pull out our holiday sweaters and feel more festive!” she grumbles.

While Daisy is outside grumbling about the weather, Marcus is inside admiring their son’s holiday crafts.

Marc asks his mom for some advice. Daisy doesn’t want to be too firm and certainly not too lax so she opts for what she considers a safe middle ground. “If you do, other kids might tease you.” Marc smiles and nods but Daisy still isn’t sure she made the right choice.

Time to get started on making their holiday meal! Daisy had it all under control until … SIGH her husband scooted past to make yet another pot of tea. splash shriek “MARCUS!” He’s not even phased by Daisy’s shouts and shrieks. Fortunately, the ham and sides came out just as Daisy had hoped they would. 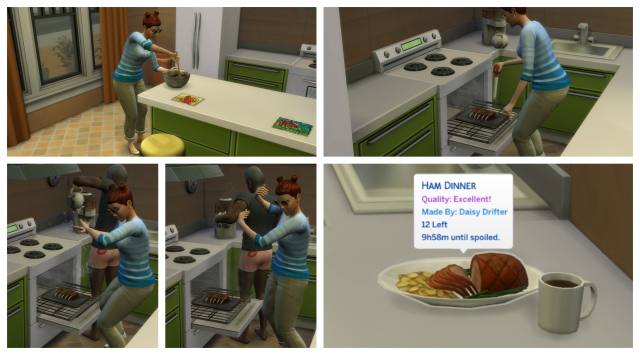 “Welcome! Happy Winterfest! We’re so glad you could make it!” Daisy greets their guests. Soon afterward, everyone sits down and enjoys the delicious meal. “It’s so nice to share the holidays with others!” Daisy says with a big smile.

Their guests opt to stay inside when it’s time to trim the tree and hang the exterior decorations.

Their home looks so pretty, all decked out for the holidays!

As things start winding down, a tired little boy settles down for a long winter’s nap. “Goodbye! Thank you for coming!” Daisy and Marcus say.

SIGH The dryer broke again! Daisy moves the wet clothing in hopes that the unit won’t catch on fire while she fixes it. She’s seriously considering getting a clothesline!! 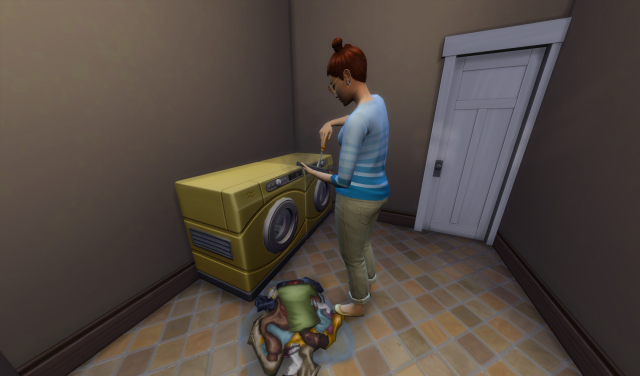 When suddenly … out on the lawn there arose such a clatter … Marcus and Daisy took a look to see what was the matter … It’s Father Winter! Marcus dances with joy as Daisy welcomes their honored guest. She smiles politely when she sees her gift and thinks that he has quite the ironic sense of humor! 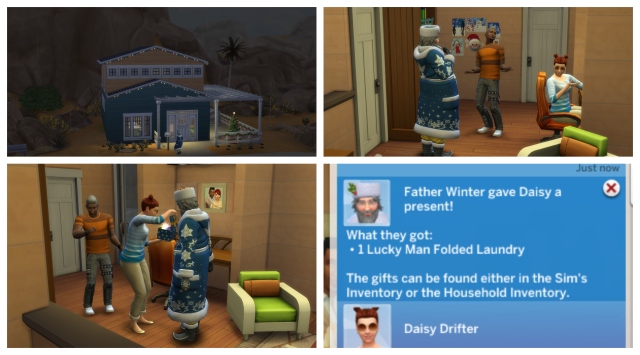 Daisy takes her gift to the laundry room and discovers that the washer is broken. BIG SIGH fingers crossed that Marcus will entertain their guest, Daisy pushes up her sleeves and gets to work. Within a few minutes, she feels a presence behind her and sees Father Winter quietly watching and observing it all. Daisy smiles brightly (while feeling a bit irked at Marcus) and says she’ll be done in just a few minutes. Before she knows it, they’re singing holiday songs and getting showered in confetti. With a twinkle in his eye …

Father Winter says goodbye. It’s time for him to fly! 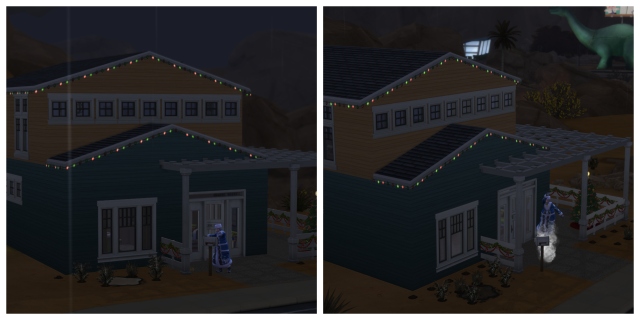 Visions of sugar plums aren’t dancing in anyone’s heads, but it’s alright. Time for this family to say Good Night!

It was a nice holiday and is one Daisy will remember for a long time.