Marc heard a weird noise while he was eating breakfast and told his dad. “Your mom will take care of it when she finishes working in her garden,” was the reply he got.

As soon as Daisy finished fixing the dryer (again!) she had to rouse a sleepyhead. “C’mon Marc! Get up and do a few stretches to get yourself going. The school bus is almost here.” 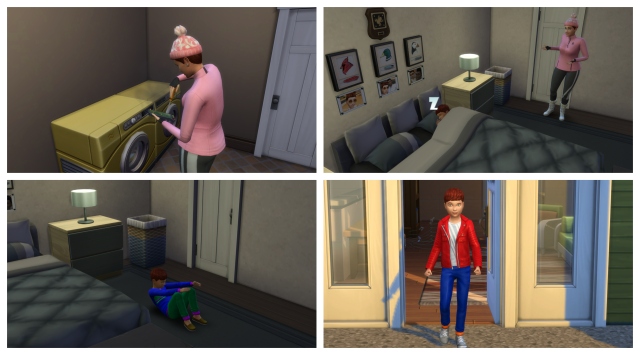 Then she headed off to work.
Note: I decided to send her off and see what Marcus gets up to when he’s alone.

Marcus’ routine doesn’t vary much. He exercises and drinks tea. A LOT of tea! He was quite surprised to get a phone call from the school informing him that Marc has been trying to kiss other students. “Kids will be kids,” he said and ended the call as soon as could. “It’s a good thing they called me and not Daisy. She probably would have said he’s too young for kissing or some such nonsense!” 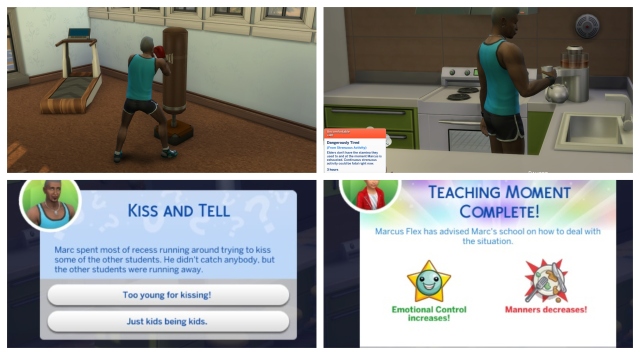 A short while later … Marc texts asking his dad what he should do about a kid hitting him with stuff. Marcus advises him to “tell the kid to stop” and that should be the end of it. “Ignore it and the kid will keep on doing it since he found an easy target.” Marcus doesn’t understand why Daisy gets herself worked up over these things. “Parenting is easy!” Marcus thinks to himself. 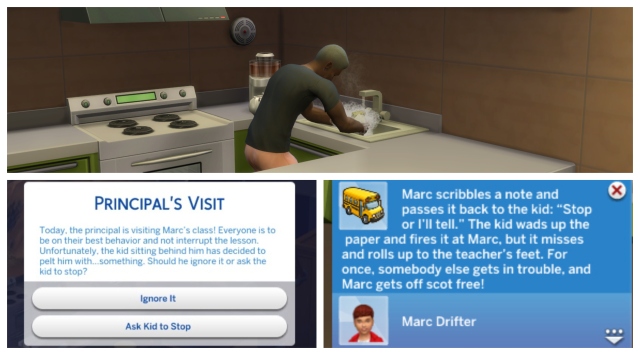 Marcus cleans and tosses a load of laundry in the dryer, contemplating what he should do next when he hears someone in their back garden. It’s Daisy! “You’re home early!” Marcus says as he pulls her in for a big hug. 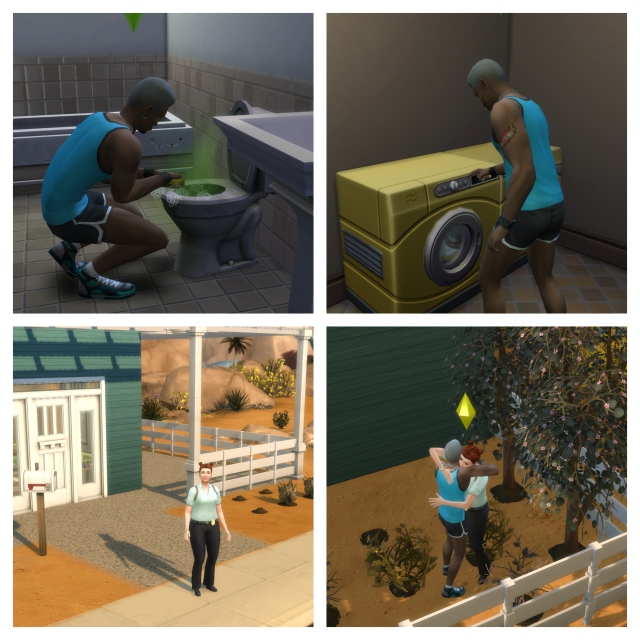 Daisy looks around before lowering her voice to answer him. “I know! There’s been a number of bomb threats with the target locations being … the mayor’s office … the station … and a few other important buildings. The BBB has struck again! “The BBB?” asks Marcus. “Yes, the BROWN BAG BOMBERS, a group that protests various causes and sends their home-made devices in … you guessed it … brown paper bags. Everybody has been on high alert and as soon as a single bag is seen, the bomb squad gets called in and all sims have to evacuate the building. They found several bags at work and sent all of us home.”

The school bus drops Marc off. Daisy tries to encourage him to get started on his homework but Marcus keeps interrupting because there’s a ball game on and he’d like the two of them to watch it. Daisy’s throat-clearing and pointed looks don’t seem to phase Marcus as he keeps on chatting about various stats and players.

The game was okay but Marc is wondering why his dad is so attentive … almost as if he doesn’t want to let him out of his sight. As soon as Marcus goes to make yet another pot of tea, Marc sees his chance and calls out, “I’m going to go take a bath.” and runs up the stairs as quick as he can without getting yelled at for running in the house. Afterward, he continues playing with his tub toy.

Eventually things start winding down and the guys turn in. Not Daisy though! She found her groove during the workout video and is feeling pretty pleased with herself. 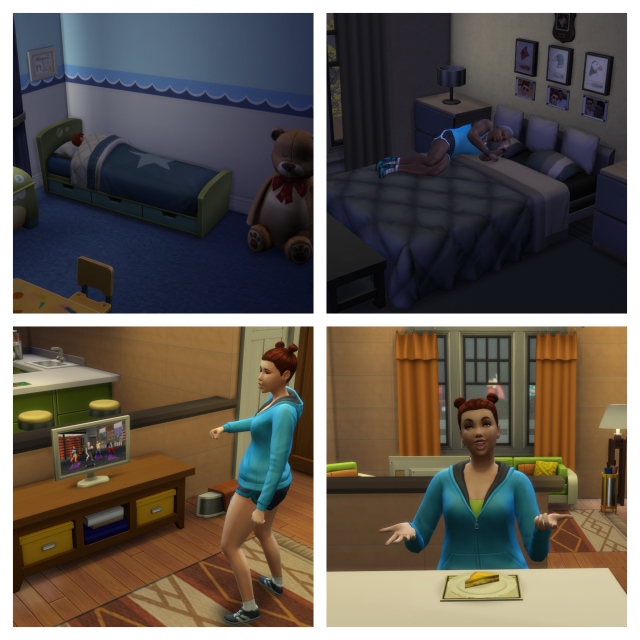 Both Marcus and Daisy get under the covers and are soon fast asleep. Zzzz

Note: In case any of you are wondering, I’m having an issue with sims leaving school or work early. BreeMiles found the link regarding this issue having been reported and it seems that the sack lunches are the culprit. Not going to bother making & taking them any more. **fingers crossed** that this fixes it!