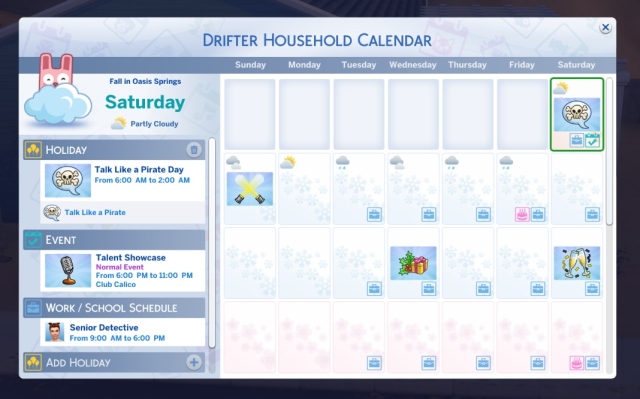 … It could have been if Daisy hadn’t been ROBBED! As she’s planning her day & checking the weather, she receives several unexpected messages. A co-worker passed during her time off. Daisy doesn’t know when or where it happened so has no way to properly mourn this loss. She’s also expected back at work. WHAT?! No Family Leave? She doesn’t even have time to finish her tea at home & drinks it as soon as she enters the building. SIGH So much for bringing a packed lunch. Cafeteria meal it is. 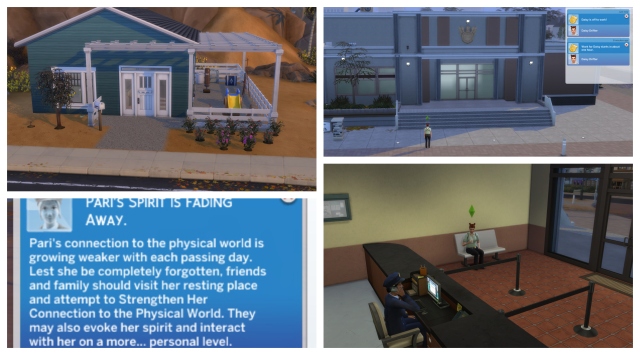 To further pour salt on the wound, she spies several in costume when she glances out the glass doors. One of them is Travis’ wife, Jade. 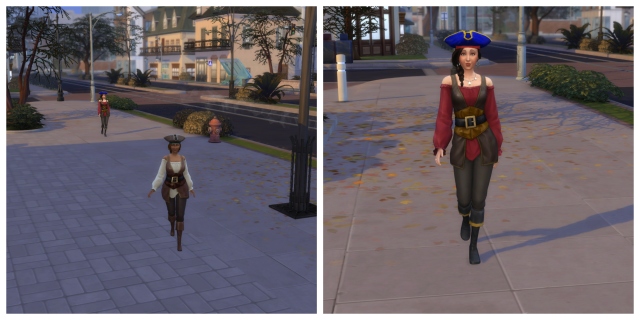 Oh dear. It seems like more changes will soon be happening to the company payroll. Several co-workers, including the Chief, are Elderly now. The four prisoners have also aged and Daisy fears they will pass before obtaining their respective releases.

Daisy and Emely agree that solving this particular case requires following the trail of simoleons. Daisy offers to help out in the lab since there are boxes of evidence waiting to be processed and she’s sure she’ll find something pertaining to her case if she digs deep enough. 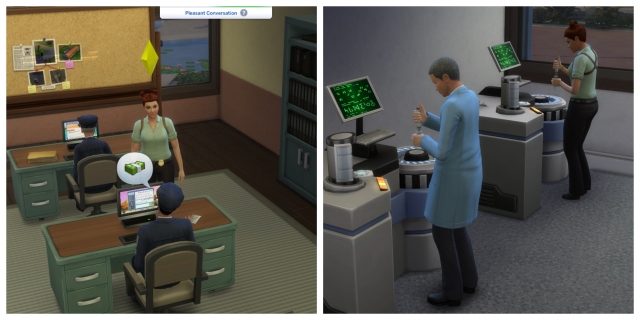 Success! Daisy discovers that the suspect is Erratic. Being very familiar with the signs of what to look for, Daisy goes to pin the pertinent info on the board & notices the broken computer. Poor Emely! Daisy offers to fix it since they don’t have time for a computer to be down in this busy station. Daisy doesn’t see Emely waiting to return to this now-working workstation and starts entering the witness statements that have been piling up. She’s sure a fresh set of eyes will uncover something others might have overlooked.

She has! The suspect is wearing a blouse and has grey hair. Time to add this data to the board. 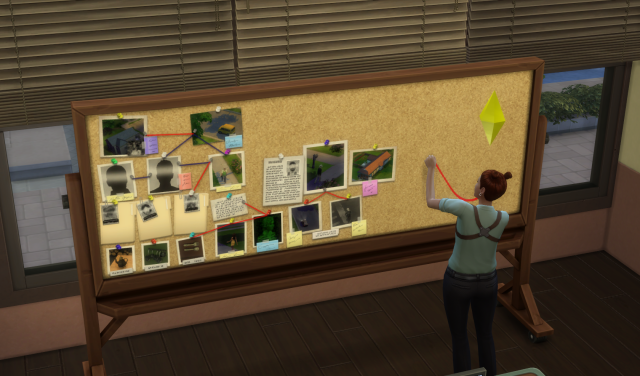 Oh my … a free workstation. Will wonders never cease? Digging through crime photos and adding info to the database, Daisy wishes she had known to take more time off. She is missing her family! Caleb stops by, wanting to use the computer and Daisy discusses case theories with him before relinquishing her seat. 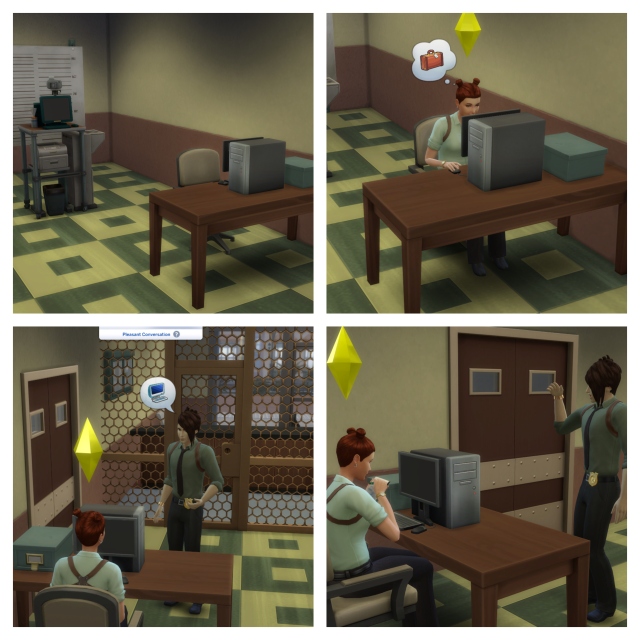 Somehow Daisy manages to complete the Holiday traditions while chatting with co-workers and even deepens friendships with several of them. 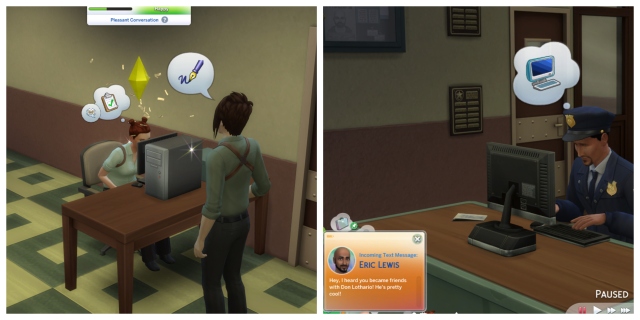 Another officer repaired the broken analyzer before Daisy could get to it and left quite a mess when she was done. Speaking of messes … Daisy received notice that Marc was sent to daycare. She’s unable to reach Marcus and find out what happened. Thankfully it was about an hour from the end of her shift so she can return home & find out what’s going on. 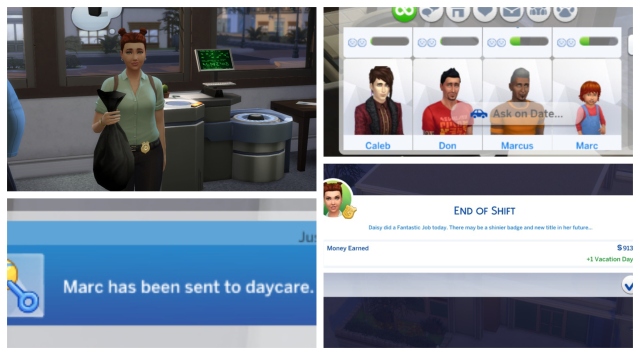 Marcus is arriving home right as she is. “Where did you go? Is everything okay? I couldn’t reach you and got really worried that something had happened to you!” 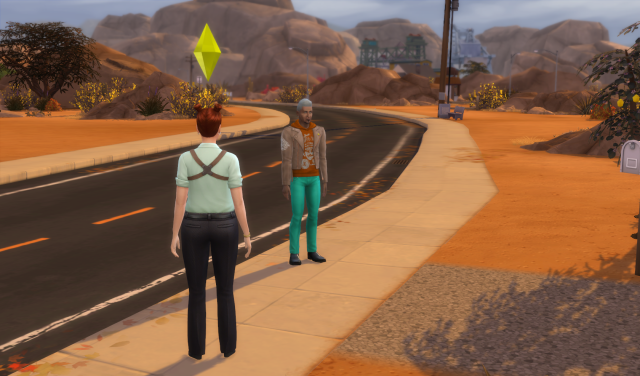 “I went out.” is all Marcus said before heading inside to grab a bite to eat. Daisy notices the scrunched up look on Marc’s face and hustles him to the potty chair. Her face would probably get scrunched up too if she saw the mess Marcus left behind in the kitchen. 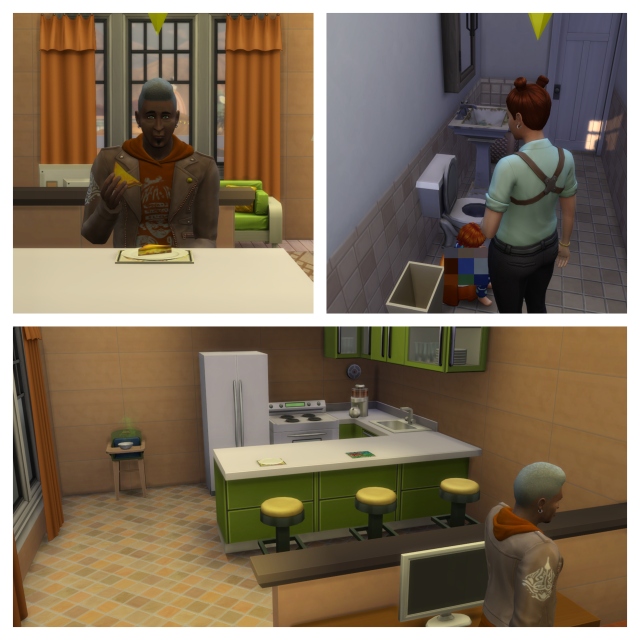 Daisy is trying to look on the bright side: Marcus is modeling using the toilet and she hopes Marc will catch on sooner rather than later. Marc toots rather loudly and Marcus starts to laugh but stops when he sees Daisy looking at him & using her chin to point at the dirty sink. He uses it and then leaves the room … NOT the message she was trying to convey. Seeing her son happily jumping up and down because he didn’t have an accident, Daisy tells him he did a good job using the potty. 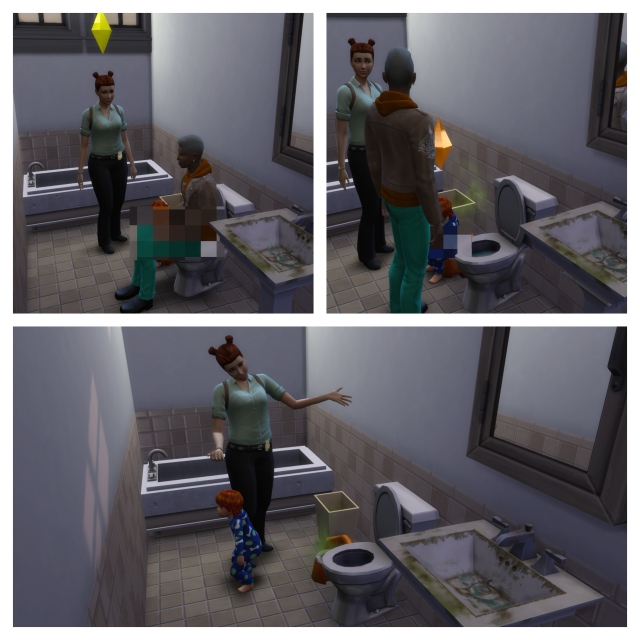 Daisy cleans the bathroom and gathers laundry from the various hampers. Dad and son are watching the Kids Network station & enjoying themselves. As soon as Marcus sees her, he drops down to gather their son in a big hug & it melts her anger a little bit. 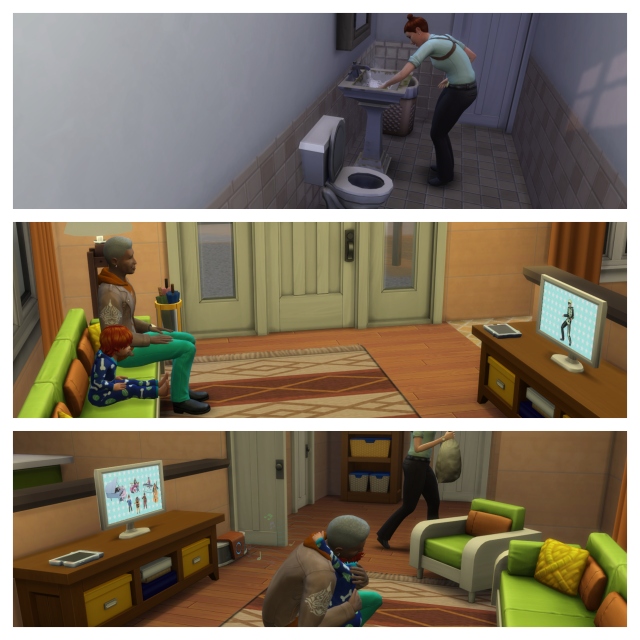 Marcus nods at her and heads outside. As soon as he leaves, Marcus lets loose a mighty tantrum because he is tired. Poor kiddo! Daisy tries calming him down but he wants no part of it. (This Independent trait is tough! It took their friendship from good friends back down to friends as soon as she attempted to calm him down) 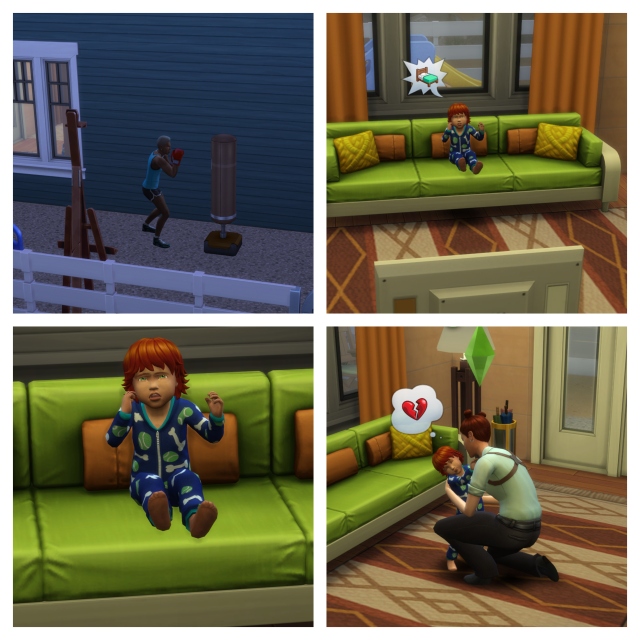 Yet at the same time her hug is being rebuffed, Daisy earns a Great Reputation. 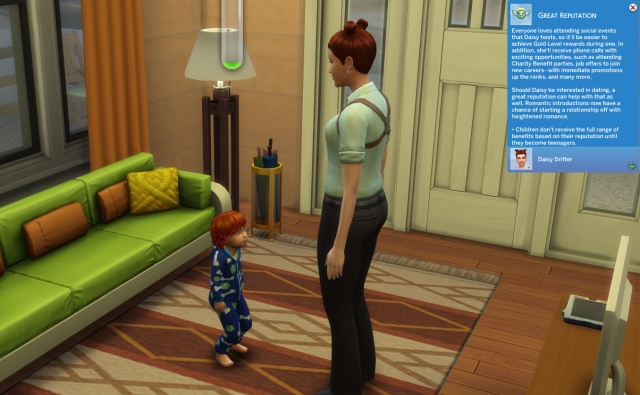 Time for bed, young man! Daisy reads another story and tucks Marc in. Turning, she discovers Marcus silently standing there … looking sad … before he leaves the room and goes to bed himself. 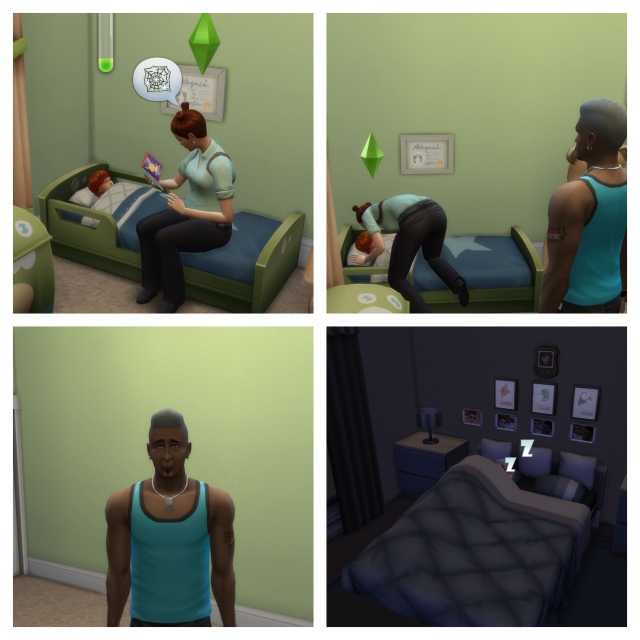 Not much progress happened to Marc’s stats today. Bummer! Daisy is going to call the Nanny before leaving for work and see if that makes things better for both of her guys. 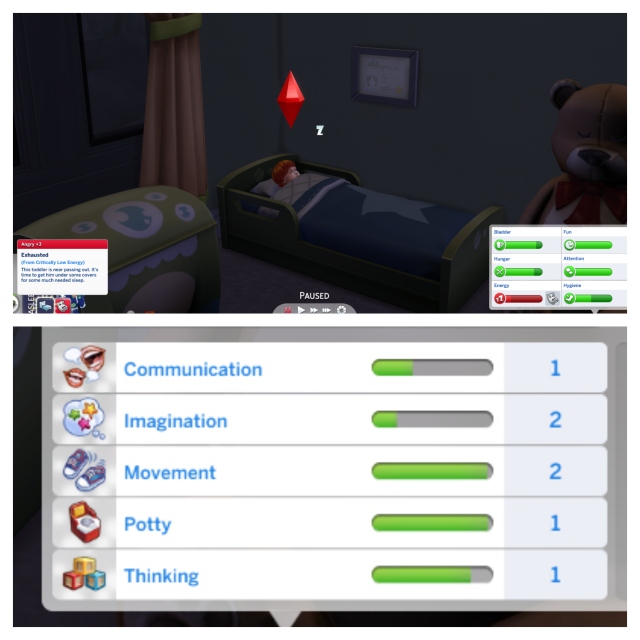 Somehow, Daisy manages to reach Level 5 in Parenting. This hasn’t been easy and she’s seriously reconsidering wanting to have another baby. A playmate/sibling would be nice but she’s not sure she could handle two difficult tots with such a demanding job. Lots to ponder while she finishes the laundry, cleans the kitchen and takes care of the garden before dragging her drooping body to bed.

Daisy decides to splurge and get a home computer. She’s sure she’ll have enough to cover bills when they arrive. A computer offers many options for fun, which is something they definitely need!