Daisy woke up early. Whether it was the excitement of her first job or learning how to catch crooks like Nebber, she didn’t know. While clearing up after breakfast, Daisy saw someone in the distance. “Nothing wrong with being curious … I mean neighborly, lol!” Daisy introduced herself & quickly realized that Tetsu Fujita is a vampire. Unsure of what the proper etiquette is, Daisy kept their conversation brief. Good idea since he looks a bit peckish!!

Daisy took a shower after her round of collecting & selling. Not sure how fresh she’ll feel with the nearby bush ‘perfuming’ the air. 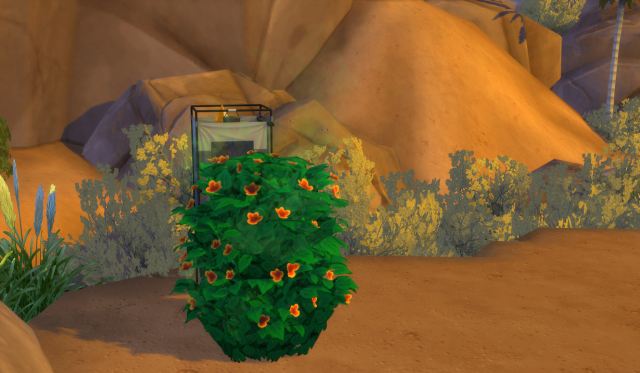 Wow! This police department is HUGE!

Daisy hopes she doesn’t get lost or make dumb mistakes. And she really hopes she’ll get names and ranks right!

Saanvi was kind enough (and in-between calls & visitors!) to point Daisy in the right direction. “Welcome to the Madhouse! Hope you have a good sense of humor!” she said with a wink. The chief told Daisy to hop on a terminal and grab a case assignment but that was easier said than done.

Daisy managed to ‘convince’ the receptionist to let her borrow the lab computer for a couple of minutes and got her first assignment. (Note: ALL computers were occupied so Daisy had to get creative with getting a co-worker to move. I wonder how often she’ll be able to get away with cancelling ‘ask to look at clouds’ before they catch on)

… and away she goes!

The scene of the crime

This place is HUGE! Fortunately, Daisy could hear sounds of activity in the room ahead of her so she didn’t need to call out and identify the rookie in the room.

Daisy got a statement from Caterina Lynx and then went around dusting for fingerprints, photographing evidence & collecting samples.

After everything had been collected, Daisy headed back to the lab at the station.

Daisy appreciated the assistance Seiji offered and was happy when her second attempt succeeded.

“Excuse me, Detective Vatore. I finished analyzing the evidence from your crime scene and am ready to input the results in the computer.” Daisy was next tasked with booking the criminals in the holding cell. (shown: Sai Parikh)

Daisy quickly turned her chuckle into a sneeze when the prisoner turned around and saw what she was holding. “That’s not mine! I have no idea how it got there! Honest!”

Break Time. Daisy lets out a big sigh … whether it’s from the faux BLT sandwich or her being exhausted is anybody’s guess.

Daisy survived her first day on the job. Her paycheck was a pleasant surprise since her calculations estimated she’d be getting $180 for her efforts.

Home. Bed. Dinner. Daisy was so tired that she didn’t care which came first … shuteye or something to nosh.

Not too shabby a balance after only two days. Daisy has all the basics covered and now has enough money to be able to travel. Yay!!