After a nice chat with Brantley, Daisy makes Pitch Black Tea (good for getting focused!) and starts thinking about her upcoming workday. Sorry, Marcus … maybe another time. (Note: He calls around 8:30 and her shift starts at 9. Even if the game allows it, calling off work right before your shift starts is a good way to get yourself put on notice!) 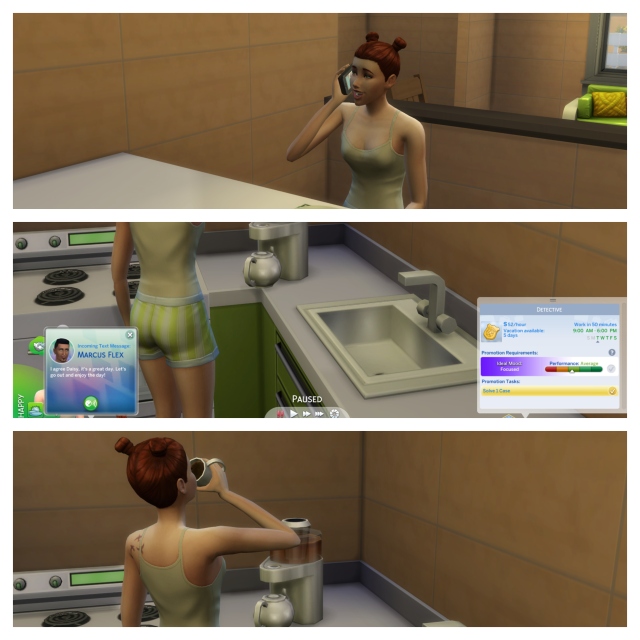 Daisy had grabbed hold of the counter to keep herself from falling or spilling her hot tea. “What in Sim was THAT?!” 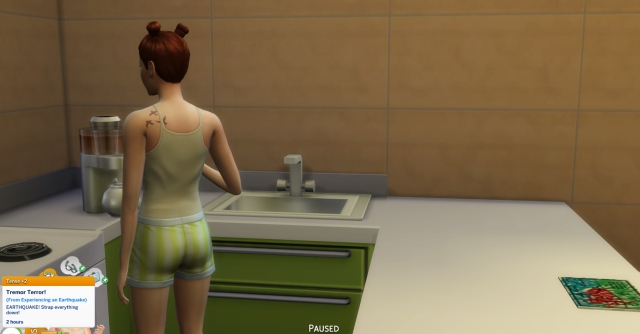 A quick check around reveals nothing out of place or broken. Whew! Daisy heads off to work …

Passing by the Chief’s office on the way to document Brent Hecking’s report, Daisy couldn’t help but notice that Marcus is in with the Chief. “What’s all that about,” she wonders. Brent saw someone playing with matches (Note: Silly game shows Marcus’ image & not Brent’s for this conversation). Daisy assures him that an officer will be dispatched to take a look.

Daisy looks over the case board, refreshing her memory as well as making sure there’s enough evidence to work with before issuing the APB. 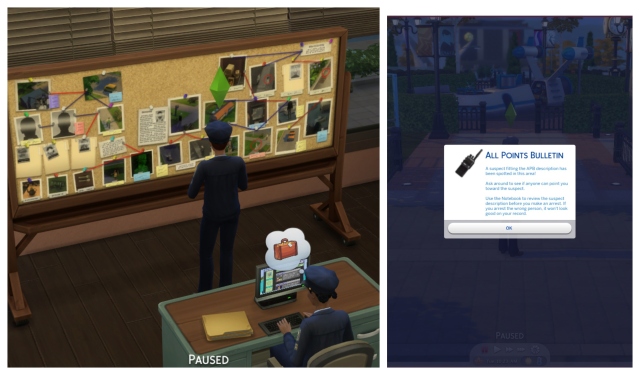 Daisy arrives at the park and after a quick glance around, realizes there is only one sim in sight. This sim visually meets the description of the suspect. Daisy heads over to say hello and see if anything else matches.

Within a few minutes of chatting with Shanaya Kumar, Daisy is fairly certain she has the right person and brings her in for questioning.

Daisy takes Shanaya to the Booking Station before taking her to the Interrogation Room. As the interrogation proceeds, Daisy knows beyond a shadow of a doubt that she IS the sim they were looking for! A short while later … Shanaya gives a full confession.

Another computer goes on the fritz? No problem to big for the Chief to handle!

End of Shift. Time to go home and relax.

Or not. Brantley sends a text letting her know that she is on his mind and invites her out on a date to the Steakhouse. YES!! He looks really good & Daisy is glad she decided to dress up.

Things seem to be going well.

Daisy is enjoying the flirtatious vibe they’ve got going but wonders why he isn’t indicating that they should go and grab a table. Then she realizes … he is WORKING! This isn’t an actual date. Why did he invite her out if he’s going to spend his time taking notes and walking away from her in mid-sentence. Brantley sits down with another critic and begins eating the food that had been set aside for them.

I agree, Salim. This IS a mess!

“Smile. Head high, Daisy! You never know who might be watching.” With these thoughts on her mind, Daisy calmly exits the restaurant and heads home. She has a lot to think about!

Daisy has enough to do a bit of shopping.