Daisy packs lunch before noticing Meryl. “Sorry, dog. If I had seen you come in, I would have tossed you a bit of the bread.” Both seem sad now.

Daisy doesn’t have time to eat before heading off to work (someone wasn’t timely in having her take a vacation day so she could mourn!) so she opens her sack lunch as soon as she gets there. She’s sure the Chief won’t mind.

Time to take police reports from civilians. WOW! A celebrity in the station. Thorne Bailey must be putting in a request for a restraining order on a stalker. However, Daisy doesn’t show preference to the star in the station and calls the next number.

Back to the case. There are enough clues to issue an APB!

Daisy gets the call that a suspect matching the description has been spotted and quickly heads over. Seeing Marcus on Bouncer Duty, Daisy asks if he knows anything about the lady in the purple dress. He doesn’t know anything beyond her name. Kacie Robbins. He also doesn’t know how to prevent Kacie from passing by.

“And where do you think you’re going, Miss Robbins?” “Oh, err, out …” “That’s right! Out the door and down to the station for some questioning!”

Daisy escorts Kacie from the Holding Cell to the Interrogation Room. 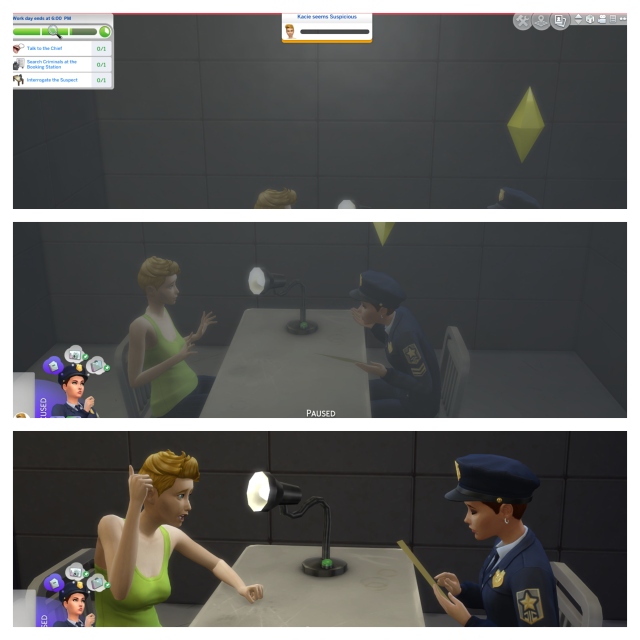 Daisy reviews the case file and pays careful attention to Kacie’s reaction. Then she shows Kacie the Crime Scene Photos and catches the tell-tale slight flinch at the last one. Kacie then mops her brow. 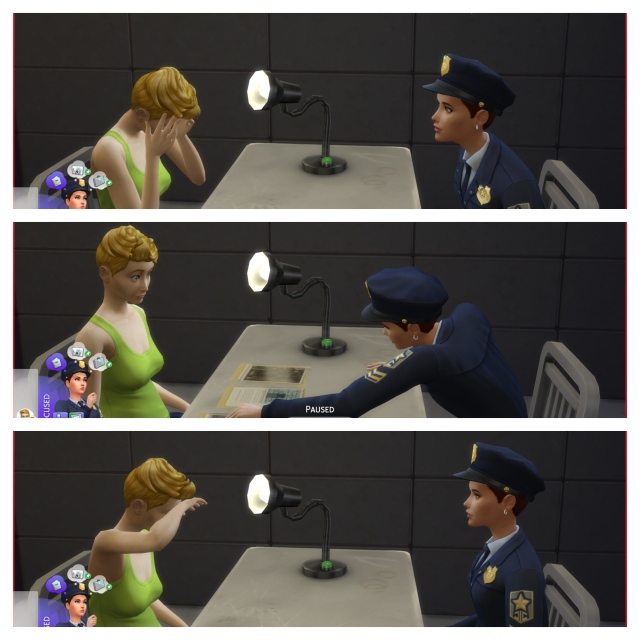 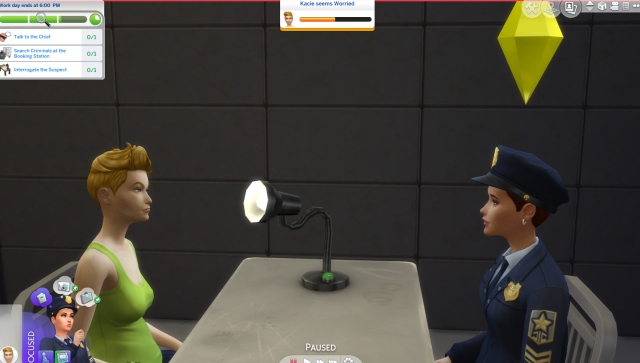 Daisy discusses the Forensic Evidence, the Witness Statements and her gut tells her that this suspect appears to be guilty… Daisy then Reveals the Calling Card and knows she has her set dead to rights!

At this point, Kacie looks very worried and before Daisy can say another word … she gives a full confession.

Daisy escorts Kacie back to her cell. Case closed!

It won’t be long before shift change. Daisy meets the newest member of the team, Anika Raghavan. Another Raghavan? She must be related to Saanvi (RIP) and Pari. It’s a good thing there isn’t a problem with nepotism here! Daisy plays chess with Seiji. His “style” is very similar to that of Eric’s. Hmm …

Daisy tries to take a quick nap in order to salvage some of her evening (her poor garden! needs a collection run!) but hunger interrupts her efforts. She’s tired … hungry … and to top it all off, there’s a party at the Chalet that she must turn down because she’s highly likely to drop to the floor as soon as she arrives and bottoms up is NOT a way to make an impression!

2 cut fingers later … Daisy has fruit salad. SIGH Yet another poor quality meal she’ll have to choke down.

It’s Fruit Salad! You take various fruit and slice them before tossing into a bowl. How hard can it be? Daisy decides she’s going to have to get a handle on meal-making or find someone to do it for her!!

“Not now, vampire-I-don’t-know! I hear you making those weird noises and have no intention of introducing myself at this hour. Go away!” Daisy grumbles as she heads off to bed, too tired to do a collection run.

Slowly but surely, this is coming along and Daisy is about ready to make improvements.