Liam learns that his friend, Morgyn, isn’t home so he will need to go elsewhere for a meal and conversation.

Thankfully, the Goth family is home and Liam is soon happily digging into a plate of Mac n’ Cheese.

Bella and Cassandra soon join him and he can’t help but notice they’ve kept their outerwear on. It’s chilly but Liam didn’t think it was that cold.

Maybe he should have offered to eat the sandwich so Cassandra could have something warm in her belly. “I feel wee bit selfish now.”

Other than Jade, Liam doesn’t think he knows anyone in Windenburg and decides to do something about it. He finds his way to the largest property, home of the Villareal family. He figures if the inside matches the outside, it will be rather grand indeed.

“They have a fountain where simoleons can be tossed. Nothing indicates wealth more than that!”

“I was right! Just look at this foyer!”

Liam wishes it wasn’t an open plan as someone is continually watching TV in the living room portion.

He sees Max come from a room off the kitchen and goes to investigate. “Jackpot! Just look at all the stuff that is swipe-worthy here!”

Liam returns upstairs and tries to chat with Max who merely turns and walks out of the room when he finishes eating.

He turns to Jacques and says, “Kids these days, go figure!” with a smile and a shrug.

Upon observing Jacques talking to the back door, Liam decides his lack of a decent role model might be part of the problem. “In this house it might be to each his or her own!”

When the coast is clear, Liam scoots back downstairs for another swipe. “Who in their right mind would keep a statue as stately as this hidden away in the basement? This fine fellow should be on display … upstairs!” 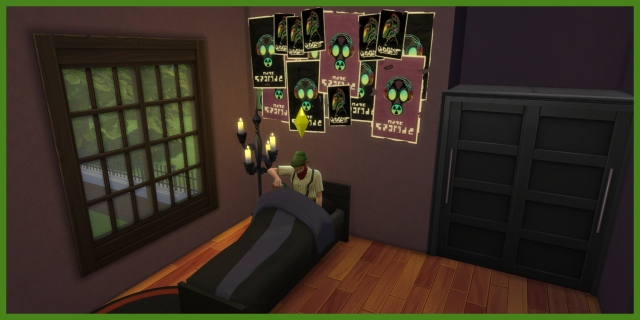 Even though the room is a bit creepy, Liam still makes use of the bed. He’s tired and this room is unoccupied. 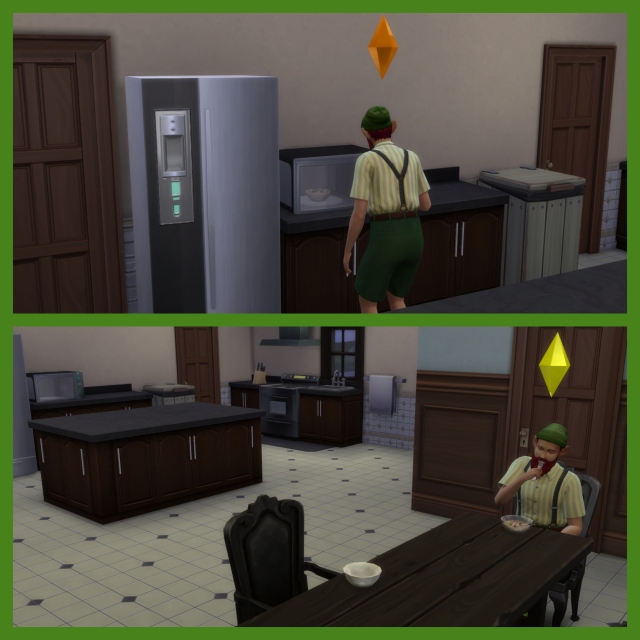 Liam makes a bowl of oatmeal upon waking and can’t help but notice that Max’s bowl is still on the table. “This kid acts as if someone else will pick up after him and from what I can tell, no one bothers to nor do they encourage him to be responsible for his own self. Such a shame.” 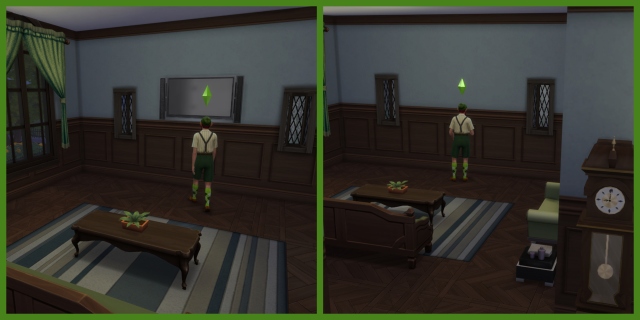 “Perhaps one less TV will encourage them to interact with one another!”
(A/N: It was sad to see how little this family interacts with one another. They watch TV or hang out in different rooms, rarely socializing. Food means grabbing a quick meal from the fridge. Hugo and Luna seem a little closer than the others but even they spend time apart.)

Liam heads home to pay bills. “Bills! I have to pay §59 for this plot of land?! That is sheer robbery!”
(A/N: He has the voodoo doll in his personal inventory which is the only thing I can think of that might have caused him to have to pay bills because up until this point he didn’t have to pay anything.)