NOTE: This day had A LOT of screenshots! Originally 127 pictures (wow!!) so will remove some of the more repetitive ones while I prepare this page. End result: Almost 40 were removed but there are still lots to look at, sorry.

Heather doesn’t work today but woke too early and NOT in a good mood! -2 points.

Alisha enjoys the cereal that Brooks made. A nice start to her day off.

Heather went to make pancakes but stopped with the “see what’s happening” thought bubble but none of the sims were shouting forbidden words. Odd. -1 point (treating like drop trash on floor).

Alisha quickly washes her dish when she sees Tyler run up behind her (due to run inside from thunderstorm). +1 point.

Lightning strikes outside and maniacal laughter inside. Spooky!

Heather is hungry and lets everyone know how she feels about it. -2 points.

2 am and the thunderstorm is still going strong. Poor Doodle!

Darrell puts away a book that someone left out. +1 point.
Then he puts away Heather’s book while she sits staring off into space. +1 point.

Tyler is energized and decides that since the storm has passed to go “mop like mad!” +1 point (since it is cleaning the floor outside).

Heather gets the same idea but runs to the other side of the yard! +1 point. 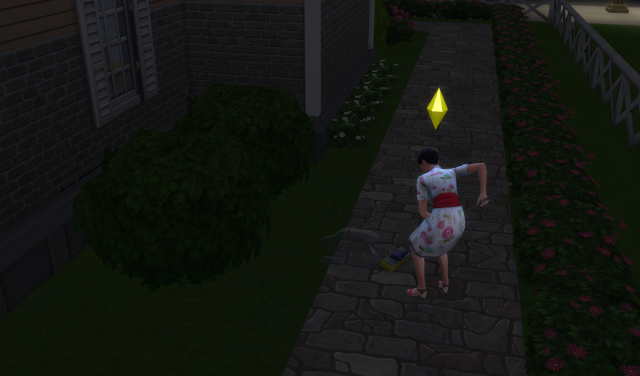 The amount of puddles stops Tyler in her tracks but a tired Alisha grabs the mop from her. +1 point. 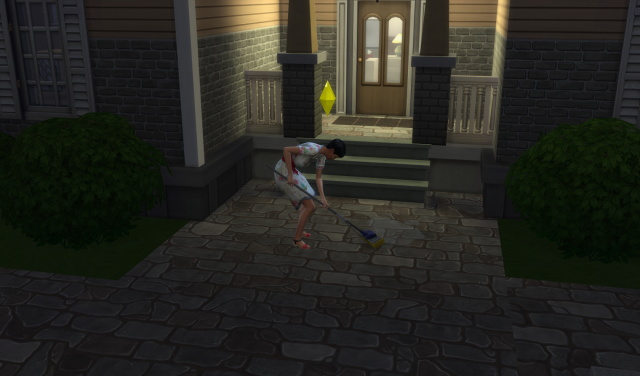 Ignoring the puddles around her, Tyler drops to the ground to do Sit Ups.

Heather quickly moves to the next puddle before Tyler or Alisha can claim it. +1 point.

Doodle is doing his part in cleaning up, lol 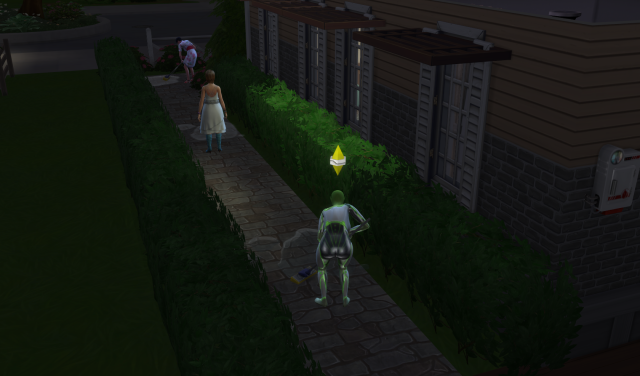 Poor Doodle really has to pee!

Heather and Alisha head to mop the same puddle but Heather steps aside. +1 point for Alisha.

Alisha then goes inside and takes a nap on the couch since all beds are full.

Josephine turned on the TV and woke the others. Alisha gave the command instead.

Doodle made it just in time and left two “presents” by the front door.

Josephine puts her book away. +1 point.

Doodle is happily running around outside.

Shame about the moodlet. Hope it doesn’t lead to her losing points by shouting forbidden words.

Tyler looks like she’s preparing for a role or public speaking! She starts work at 5 pm (Entertainer L3 C-Lister). 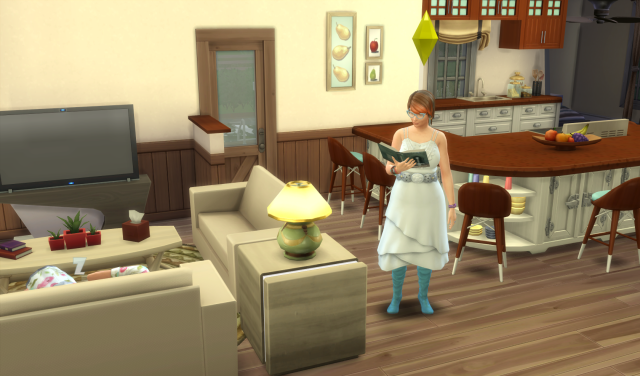 Doodle wants Darrell to wake up! Josephine is among the first to actively do something job-related. Alisha and Heather have their Daily Task partially done because shouting forbidden words is considered a mischief interaction!

Tyler is a Glutton. Tyler is Uncomfortably Hungry. Tyler is ignoring the kitchen behind her to read “Point Farmer No More: The Downfall of Grant Rodiek”. Maybe the reason for no more was no more FOOD!

Her Daily Task is 25% done so Josephine heads inside to eat some animal crackers. 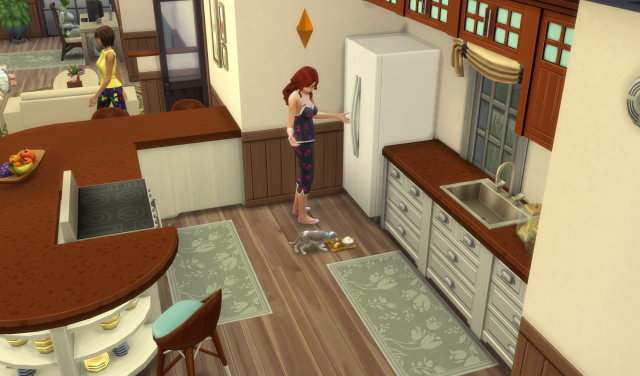 Josephine might have enjoyed her animal crackers better if the smells of grilled cheese didn’t permeate the air.

Doodle ate from the food on the floor several times and …
Heather came back over, picked up the tray and is continuing to COOK

Bad game. No fair! The weather forecast said CLOUDY
7:07 am on Day 2

Does this look like cloudy to you?
Addy’s Note: I changed the season length from 28 days to 14 days so that’s more than likely why there is a difference now.

Darrell and Brooks are asleep. Alisha is “trolling teh forums” and the rest are hanging out in the kitchen/dining area.

This caused a reaction from Heather and interrupted her from finishing the cooking process.

Addy’s Note: Looked over the rule: Heather gains +2 points for using the stove.

Brooks is heading to grab a bowl of chips, Alisha is eating animal crackers, Tyler has applesauce and Heather is eating the pancakes she made.

8 am: Virginia doesn’t seem happy to be leaving for work.

Brooks is disappointed that he ran out of chips. -2 points.

Brooks goes to wash his bowl and gets +1 point. Alisha went to empty the trash in the outside bin but the weather stops her for -1 point.

This is really cute!

Brooks really has to pee! Josephine accidentally walked in on him right before Darrell claimed the bathroom. He has Privacy Invaded! moodlet and hers is Cannot Unsee! Alisha ignores their forming a potty line and puts a book away. +1 point.

Addy’s Note: The rule for walking in on someone came about later so won’t be reflected in the daily score.

Josephine gets to the bathroom before Brooks. (He needs it more than she but Sims be Sims!) He steps outside and does a bit of mopping to focus on other things. +1 point. 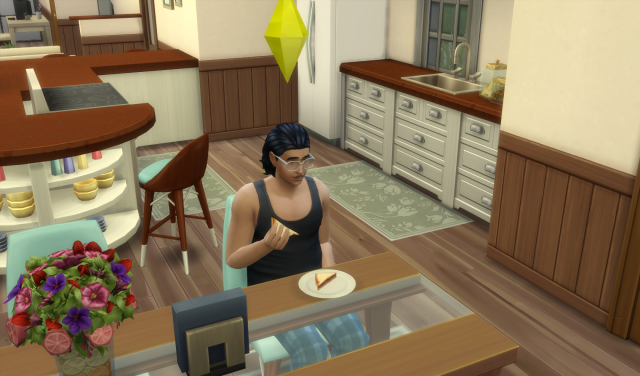 Josephine left the bathroom and then returns to interact with Doodle but … got more than she bargained for. Silly Sim forgot why Heather shooed her out of the bathroom! An embarrassed Josephine leaves the bathroom and gives herself a pep talk. 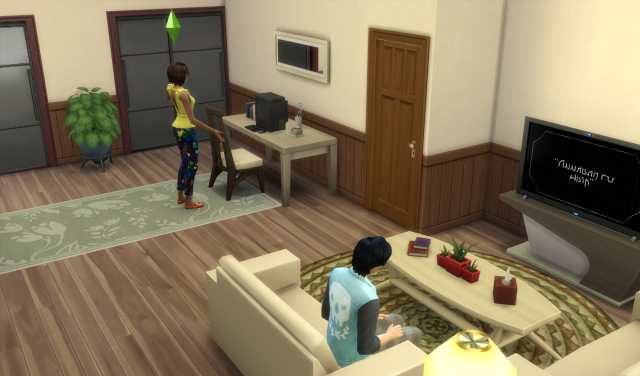 Heather heads over to get Darrell’s plate but he thanks her and says he’s got it. +1 point.

After washing his hands, Brooks gives himself a pep talk. “Fight off your embarrassment! You got this!”

Then he goes outside to play in the rain. Goes out, comes back in and does this: 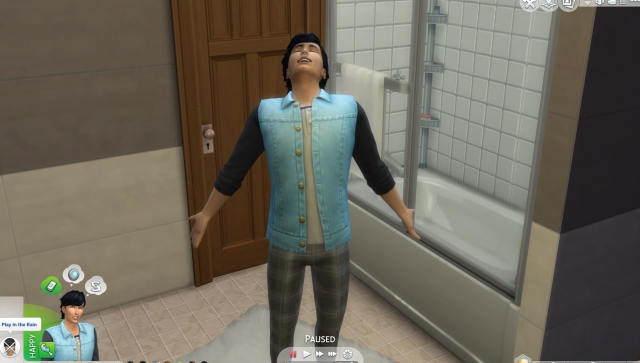 Addy’s Note: Alisha also did this while playing in the rain but I wasn’t quick enough to grab a picture when she did this same pose by the front door and didn’t connect the dots then. But Brooks went all the way into the bathroom before expressing his enjoyment of the rain, ha ha

Virginia has a work opportunity!

Was going to roll a die but the last sentence made me just grab the second choice.
How did things turn out? 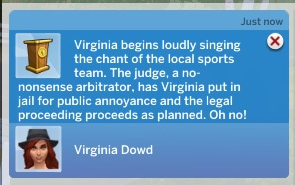 Josephine researches parenting methods, Tyler puts away Darrell’s book while he grabs one he might enjoy more. +1 point to Tyler.

Nobody said you had to put his book away! -2 points.

She follows it with a bit of roughhouse which is perfect for this active pet!

Peeked to see where the lightning struck … poor Bjorn Bjergsen! 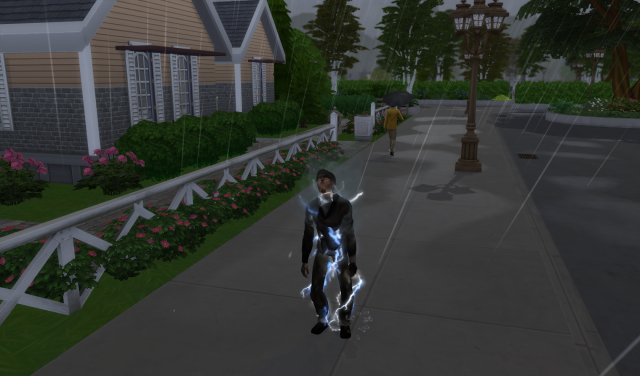 Brooks tells the others a funny story about a can that got kicked from Sim Lane to Sulani and the adventures/misadventures it had along the way.

Doodle braves the storm to add his own puddle near the one left by the rain. 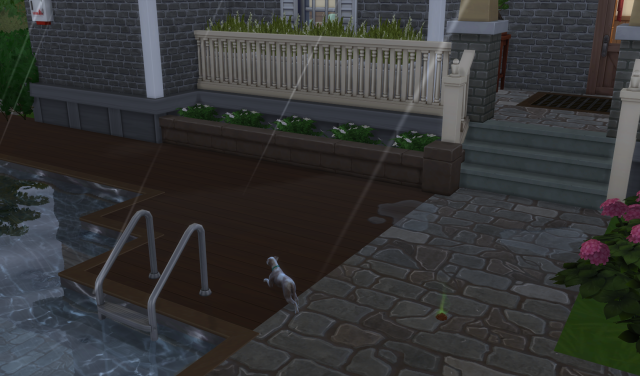 Tyler sneaks off to read a guilt pleasure: Untamed Treachery of the Heart by Leslie Nighttime but was caught indulging in a different guilty “pleasure”. -2 points. 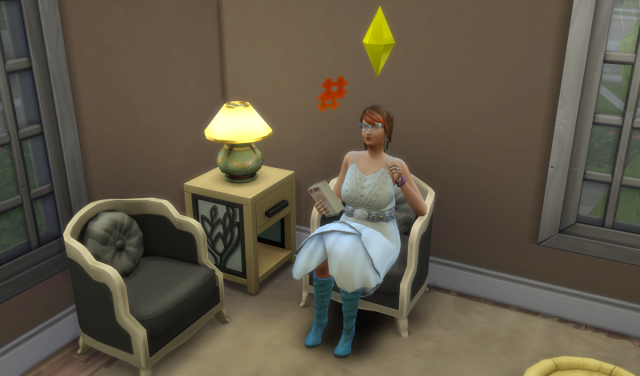 Before anyone notices her lack of ladylike language, she puts her book away. +1 point.

Doodle helps himself to the trash pile instead of eating his regular (and I’m sure healthier!) kibble.

Josephine adds stars to her bowl of Crunchy O’s. -2 points.

She redeems herself somewhat by washing her own bowl. +1 point.

Brooks and Tyler head to work. Doodle shakes himself and now has a puddle to play in.

The shower might clean the body but the forbidden words dirty the mouth, Virginia. -2 points. At least Doodle is having fun!

Both noticed Doodle’s doings but neither praised or scolded him.

Virginia, you are tense and chose to read Crisis Barn by Jim Scuttleson. You have only yourself to blame. -2 points. 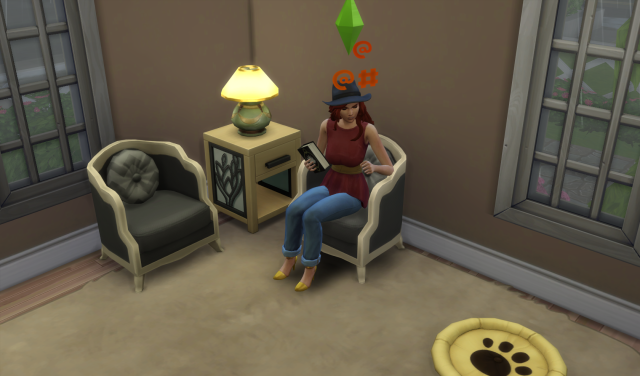 Josephine is glad Virginia let her dress after finishing her shower but wonders why she didn’t use the KITCHEN sink instead. +1 point. Dirty Doodle needs a bath but hides from the storm instead.

Neither rain nor thunder will keep this sim from doing laps. Heather ran inside but came right back out and braved the inclement weather. Silly sim!

Josephine didn’t appreciate being woken by Alisha’s rant and let loose a few choice words of her own. -2 points. 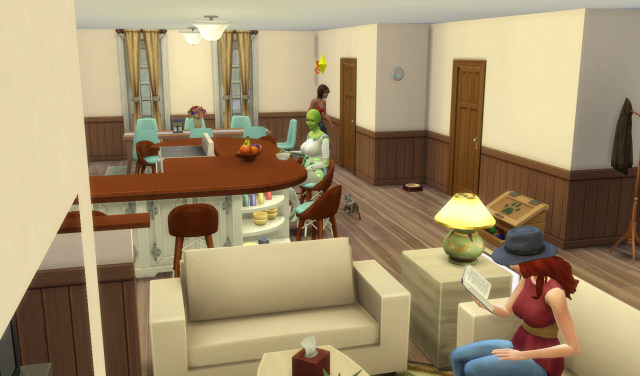 Alisha is happy because this puts her back in the lead. Virginia ignores both of them. You’re enjoying this reversal on Josephine’s part, aren’t you?

Heather finishes her swim with a SHOWER. They both head to pick up the same book but Alisha gets to it first and puts it away. +1 point.

Alisha uses the bathroom and then seeks out Doodle to scold him. Not sure what it’s about or if it is because she is evil & mean. Poor Doodle.

BLOOPER: Tyler … Darrell … is there something you should be telling the group?