She is very appreciative of the gnomes stopping by and fixing their tea maker while they slept but wonders how they got a residence key.

Perhaps it’s these gnomes? Daisy makes sure to show her appreciation because she’s heard rumors of things going horribly wrong if the gnomes get upset. Marcus seems oblivious to them. 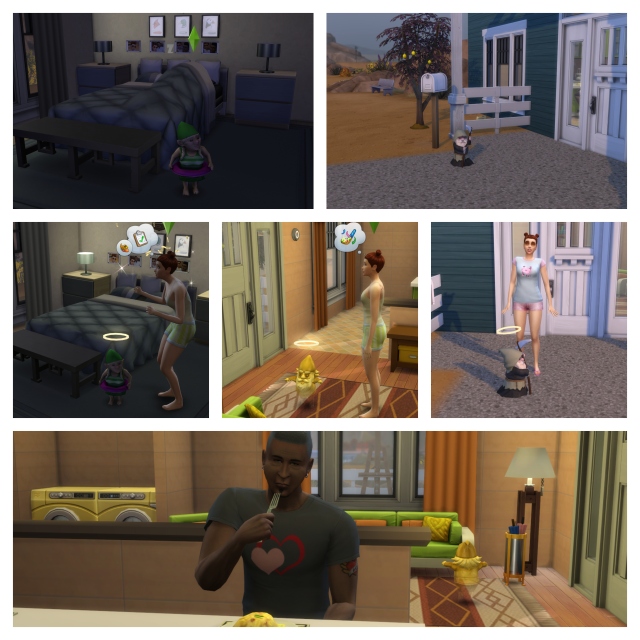 Daisy is thankful for many things (a nice home, a good job, a loving husband and a beautiful baby boy) and tells Marcus. He’s okay with gnomes fixing things and leaving gifts but doesn’t care for Harvestfest. Daisy is shocked & quickly looks around, hoping the gnomes didn’t hear him. His being good with their son wins points so she can’t stay mad at him for long. 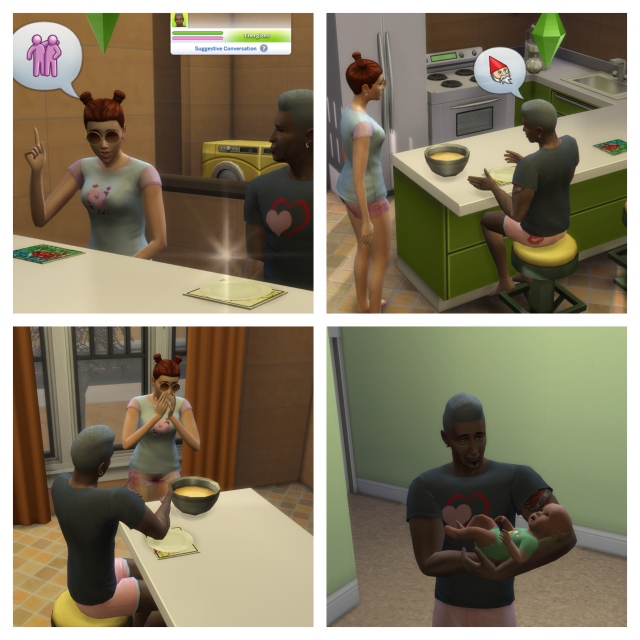 Daisy puts the cake in the fridge and putters in the garden. Several plants have evolved to Nice Quality (1 each of Chrysanthemum, Rose, Carrot) … yay! Marcus frequently works out & gets Dangerously Tired but doesn’t seem to mind as he’s intent on telling Daisy about sims being able to WooHoo in a rocket. Daisy plays it off as a joke, ” … and where would we pocket a rocket if we could afford one in the first place?” in the hopes that she can get him to relax and not further stress out his hunky, but older body.

The gnomes are continually popping in and out of rooms! Daisy likes the seed packets they leave behind but wishes there was some sort of warning because she never knows where they’ll go next.

Happy Birthday, Marc! What a cute & determined looking little boy you are! (Daisy immediately tries teaching him to walk and he walks away from her. Independent is going to be so much fun, I can tell!)

Marcs crawls up on the couch and doesn’t seem to like Daisy’s suggestion of stacking blocks together. He goes to start stacking, but … Daisy is Tense & He’s Angry. (It’s going to be quite the challenge in getting him to learn skills. Independent means he wants to do for himself without help. This defiance also cost him & Daisy their good friend status.) 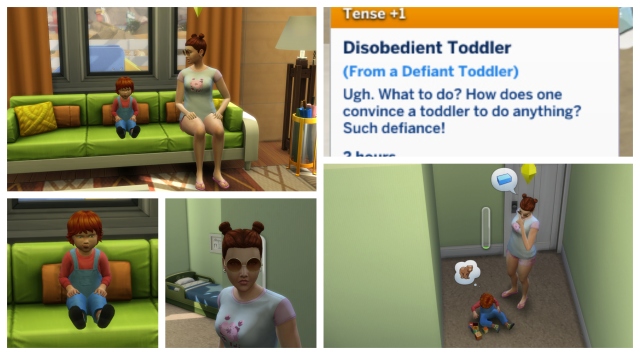 And where is Marcus during all of this? Where else? But … check out his shoulders!!

Blocks get abandoned for a quick bite and Daisy is pleased to see Marcus checking on their son. As soon as he pulls out the flash cards, Daisy sees her chance to go & freshen up. Her privacy is soon invaded by a toddler looking at her as if wanting to know where she went and what she’s doing. Daisy makes a mental note to be sure the bathroom door is firmly closed in the future. Imagine this happening when they had company over. 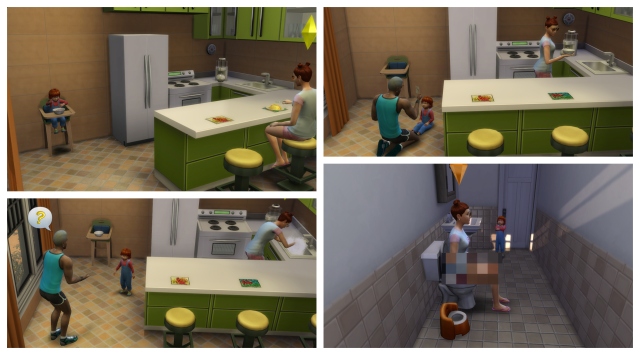 Nap Time! As soon as Marc curled up on his bed, Daisy and Marcus saw their chance to head to the bedroom too.

With his parents still napping, Marc gets up & immediately begins to cry because he woke up too early from his nap. He then amuses himself for a few minutes with the blocks but is still tired and getting angrier by the minute because of it.

At dinner, Daisy amuses Marc with a story about a spider who cried when it rained and messed up his web. The sun came out and showed this little spider how beautiful his web really was, which made the little spider smile again. Not having heard anything about Family Leave, Daisy calls to request a day off. Marc decides to throw a temper tantrum so she ends her call as soon as she can & calmly tells him that this isn’t the way to get mommy’s attention when she’s on the phone. She pulls Marc in for a big hug to soothe him while letting him know she still loves him. Out of the corner of her eye, she sees an unwanted visitor and distracts Marc before he notices.

Time for bed, little man! Daisy reads “Dog on a Log” and smiles to herself when she sees Marcus just inside the doorway, watching them. Good Night, Marc. Sleep well.

Marcus and Daisy tiptoe out of Marc’s bedroom and finish a few chores that needed doing. Daisy then heads to bed & is a bit taken aback by the gnomes in their bedroom but realizes that their halos make nice night lights. 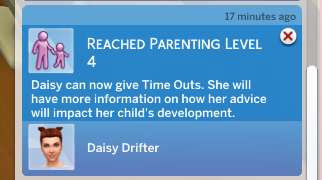 Daisy’s day off was approved but later on, this message about Family Leave popped up. What Family Leave? Daisy had to work on Wednesday after giving birth on Tuesday night! Thursday was a holiday so that shouldn’t count as Family Leave time. Will have to see when she has to return to work in order to see if she got any time off at all.

Marcus isn’t quite ready for bed and I’m sure Daisy would have melted on the spot if she saw him tuck his son in. I know I did!

He looks like such an angel when he’s sleeping!

Time to look at Marc’s stats …

Daisy will need to find out ways to help him with Emotional Control, Conflict Resolution and Manners before those dip too far into the red.

He is friends with both mom and dad & acquaintances with Eric and Nanny. Eric is the one who sent a text about Daisy being friends with Marc. Not sure why since he hasn’t met their son. 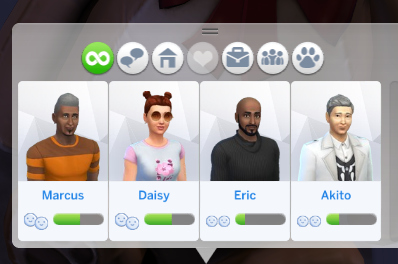 Daisy couldn’t do much as Marc was defiant more than once. This doesn’t bode well for his development. I got lucky with their chat opening up both Communication & Imagination skills.

Not really knowing what would be needed, Daisy bought a variety of things to provide variety to Marc’s toddler days.